A fascinating new exhibition opening at Amin Gulgee’s art gallery on Wednesday evening. The opening of  The 70s: Pakistan’s Radioactive Decade drew the glitterati of the art world, socialites  and art lovers: a gathering charged with a sweet sense of nostalgia. It was a nostalgia felt by everyone who experienced Pakistan in the 70s but the exhibition had plenty to offer to those who weren’t even born then.

The exhibition featured the work of around forty artists: in the form of paintings, installations, video illustrations and several pieces of performance art.  It featured a fascinating dichotomy between good and bad memories. Most of the artists focused on the joy of the 70s by illustrating how tolerant Pakistan was, particularly by paying tribute to cinema and music, which were booming during the decade. Others reminisced about Karachi’s happening night life by paying tribute to cabaret and the Muree Brewery in their works of art. While the joy of the 70s was being celebrated on one hand, on the other was the memory of war and fear. Certain artists had painfully referenced the political scenario, particularly the war in Bangladesh, which was a seminal point in our country’s history.

Upon entering the exhibition, one’s attention was caught immediately by a tank made of green and white flowers, an installation by Muhammad Ali Mirchi. The juxtaposition of a war-machine and the simple purity of white flowers made for a powerful statement about war and peace. The artist mentioned that the piece was intended as a mourning for the lives lost in the civil war.

The poster “Princess Nadia Is Here” by Nadia Batool Hussain was also interesting. The artist paid tribute to the 70s, when performing arts were celebrated as a part of culture. “Dissonant Disco” by Sherbano Hussain was another striking piece. Sherbano’s work encapsulated mixed media: a pictorial collage plus sculpture.

“I recall the 70s as the days of disco and music in Pakistan, to me it reminds me of Babra Shareef and Waheed Murad, which is exhibited on the outer layering of the collage and on the inside you can see darker graphics with General Zia’s photos.  That was the time during which the country went from being liberal to being chained and, from there onwards, entered a depressive era,” explained Sherbano when talking about her work.

Adjacent to Sherbano’s piece was a Sultan Rahi cut out by Tapu Javeri, who explained,

“The 70s was the era of music and films. Punjabi music was booming in cinema those days and this character is legendary in Pakistani cinema. This is my way of paying tribute.”

Another striking poster, by Danish Raza, was aptly titled  “Sweet and Sour 70s”. The artist had recollected and displayed world news from the time . News that not only changed the game of politics, but also news that changed and shaped future cultures.

“Memories From The 70s” by Mehr Afrooz was another arresting installation which drew the viewer in. The artist had used mixed media and created five diaries, using different forms of wood, to display her memories.

Talking about her journey, Mehr explains,

“I migrated to Pakistan in the 70s and was new to this land, which is why the first diary is faded, it depicts the blood and sacrifices involved in creating this country.  I remember the words of Jinnah, “ Unity, Faith and Discipline,” which pulled my family to this place. This is why the second diary displays three little silver boxes which are shut- those boxes are the depiction of unity, faith and discipline , which our nation has only ever kept on display but never really considered taking out from their boxes and incorporating into our lives. The third one illustrates the separation of East and West Pakistan, which dismayed the dreams of many and the fourth one is showing our current state of greed and democracy, having turned the nation to a mental state of beggary by giving them promises  such as Rotti, Kappra, Makan. Where are the values upon which nations are structured ? Untiy and Faith or the greed of Rotti and Makan?”

“Memory Box” by Omer Wasim was also a notable installation. Omer had constructed a  box  using thick concrete walls with one opening. The floor was lit from the edges, with handwritten text on the border of light. Omer explained that the piece had been inspired by the trauma of war that his father had experienced in the 70s.

“I recalled his trauma of witnessing the 1971 radical war and the crises during that time…. In order to create this I went down my father’s memory lane and revisited his pain and trauma. I wanted to sculpt a space that could house memories.”

Beenish Mahmood chose to pay tribute to the cinema and music of the 70s with her video installation titled “Forget Me Not Bashirya”. Beenish had collected various videos, music clips, movie clips, commercials and news items from the 70s. Her footage displayed music and cinema from the era alongside news clips of General Zia declaring Marshal Law. It was an insightful piece that reflected on both the positives and the negatives of the 70s.

Talking about her installation, Mahmood said,

“The 70’s was a decade I had heard so much about.  A topic of discussion that would always evoke mixed emotions from those who lived it, and intrigue in those who had not. It was a decade of huge transition for the people of Pakistan and so when I was presented the opportunity to make a study of it, I seized it!  I decided from the beginning that I would not attach any kind of moral message to my piece. I would leave that to the viewer, in the same way that I did while sifting through and piecing together the thousands of archival images and hours of footage, in order to create what I hoped would become a journey through changing culture, politics and lifestyles.  It is intended purely to be an observation of the time.”

The exhibition also included several pieces of performance art including a man curled up, covered in writing, and a ‘tailor’ sewing another man’s clothes onto him.  In “The Limbo”, Sara Pagganwala was hanging in the air dressed in a striking red bridal outfit, representing the women of Pakistan in the 70s: flashy and stylish but also perhaps making a statement about women’s roles in the 70’s:

“I leave my performances to be interpreted by the audience in any way they choose,” she said.

Joshinder Chagger and Irum Bashir also chose to pay tribute to women of the era by performing as cabaret girls.

The exhibition brought together an eclectic group of artists who worked with a variety of mediums to display their unique reflections on The Radioactive Decade. The result was a thought-provoking exhibition that left one contemplating on the multi-faceted effects of the 70s on today’s Pakistan.

The exhibition continues till Sunday although the performance art was only available on the first day. Amin Gulgee’s gallery is in Clifton, adjacent to South City Hospital:  ST.2A Block 3, Clifton, Karachi. 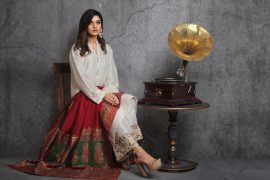 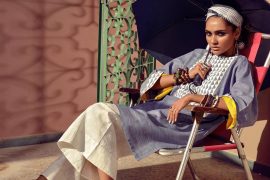 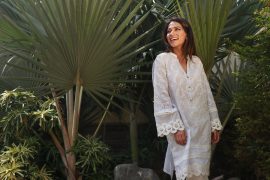