A few weeks ago CNN did a report on Pakistan. No terrorists or bombers were involved. Instead the story was an international Heliski event in Gilgit Baltistan, with an international team of Heliskiers  – one whom was Pakistani. Not only that, the sole Pakistani was actually a woman, the stunning Samyra Rashid of Walkabout Films.

The word Heli-skiing immediately conjures up images of James Bond leaping from helicopters and whizzing though pristine snow but actually Heliskiing is a very controlled and well-managed extreme sport. It has to be. Using helicopters to reach remote mountain ranges to ski long runs down uncharted slopes that carry a not-insignificant avalanche risk is not an activity to be taken lightly.

The sport requires specialist equipment such as avalanche transceivers, probes and beacons. You need specialist guides who can scout the best slopes for Heliskiing and assess avalanche risk. It doesn’t require any infrastructure, just some spectacular terrain. Just as well because while Pakistan has some of the world’s most untouched and challenging slopes, it is lamentably short of chair lifts, après ski facilities and hotels near the slopes.

The sport of course needs helicopters, which meant the project would have been impossible without the backing of ISPR (Inter Services Public Relations), which provided army helicopters for the week long event. Its worth bearing in mind this was done without wasting public resources as training flights were simply diverted to this task and in the process army pilots were able to practice drop-off techniques in a variety of terrain.

The team of Heliskiers included enthusiasts from France, Russia, Serbia, Canada and Switzerland. Brice Lequetier, the team leader and a champion skier from France was full of praise for the experience of skiing in Pakistan:
“The feeling when you stand on top of mountain is of freedom and amazement, and of feeling very little, and the bigger the mountain the littler you feel. The Himalayas and the Karakoram especially being so young, so rugged, so special, makes you feel lucky and blessed…” 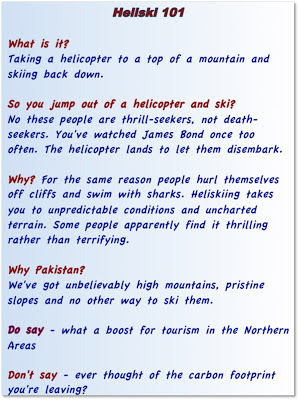 He also praised the Pakistan Army pilots: “Flying with the Pakistani army pilots was a great, great encounter and great surprise….we clicked from the first second…and this thing just rolled perfectly.”
The Pakistanis also found these Heliski enthusiasts a pleasure to work with. These are people who have skied all over the world, in places with the best possible facilities and yet they were happy to camp in basic conditions and were warm and enthusiastic about everything they encountered.

Samyra Rashid who skied with them was particularly struck by their down-to-earth attitude and the zest with which they approached everything from the slopes to the Forts and markets of Gilgit Baltistan.

The skiers tackled various slopes over six days. Each day brought new challenges with uncharted terrain and difficult conditions. Not exactly my idea of a great time but these extreme skiers loved it. Samyra Rashid who has skied everywhere from the Alps to the Rockies said that nothing could compare. “The scale of these mountains is simply mind-blowing!”

The 2013 Karakoram Heliski was the brainchild of award-winning Pakistani film-maker Nisar Malik of Walkabout films. Talented and passionate, Nisar Malik is a dedicated conservationist and master film-maker. His film about one of Pakistan’s most reclusive and endangered species “Snow Leopards: Beyond the Myth” has won awards and acclaim worldwide. Walkabout films documentaries about Pakistan’s spectacular natural history have aired on the BBC, Discovery and National Geographic.
It is Nisar Malik’s passion and

vision that brought diverse partners like the ISPR, PIA and Shangri-La resorts come together to provide services in kind to make the event possible. It was his friendships with extreme skiers that saw them bringing in all the specialist equipment and guides to facilitate the event.

Nisar Malik is no stranger to extreme sports. In 2003 he wind-surfed the three highest lakes in Pakistan. In 2006, after the Winter Olympics, he organized an event “Kite and Flight” where star skiers came to Pakistan. At that time the skiers used kites to lift them to the tops of runs and skied down. While this makes Nisar Malik sound somewhat of a Pakistani “Action Man”, actually his first love is nature and conservation. He has worked extensively filming in the northern areas and in doing so has assisted in the development of remote areas of Pakistan. He is passionate about the natural history of Pakistan; its scenery, its flora and its fauna, and says, “We shouldn’t compare ourselves to anywhere else. It’s not ‘like Switzerland’ – it’s Pakistan and there is nothing like this on the planet.”
With his beautifully shot films he aims to share his knowledge of the beauty of Pakistan. He strongly believes its an asset we do not use.

He explained how “Kite and Flight” required more specialist equipment and expertise than is easily manageable. Heliskiing on the other hand is a growing tourist sport, particularly in Canada and the US where the helicopter is used as an alternative to the chair-lift. Little or no hiking is involved unlike in Europe. With its untouched slopes and spectacular landscape Pakistan has the potential to become a real tourist destination for heliskiing. For the present, however, this remains a distant dream. While the Karakorum Heliski was a huge step forward and put Pakistan on the Heliski map, a great deal remains to be done.

It saddens Nisar Malik that it is so hard to find funding for projects like the Heliski and nature films. People will spend 2 crores on a 30 second advertisement. A nature film that takes one to two years to film can be made in the same budget and yet the nature film will have to work much harder to raise funds.

So what’s next for Walkabout Films? Pakistan Pure Discovery, a Joint Venture between ISPR (Inter Services Public Relations) and Walkabout Films is planning more extreme sports projects with a view to promoting the development of mountain sports and tourism in the northern regions. Meanwhile Walkabout films is working on filming the common leopard in Nathiagalli. They are also filming brown bears near Skardu in Geofai. Almost by the by, Nisar Malik explains how fai means giants and Geo means land so Geofai means Land of Giants. It immediately painted a picture in my head and I realized why his films are so successful. The man has a talent for storytelling. It’s a fabulous attribute for someone who is so anxious to communicate his passion for Pakistan. Pakistan should be proud of him – he certainly makes us proud of our country.