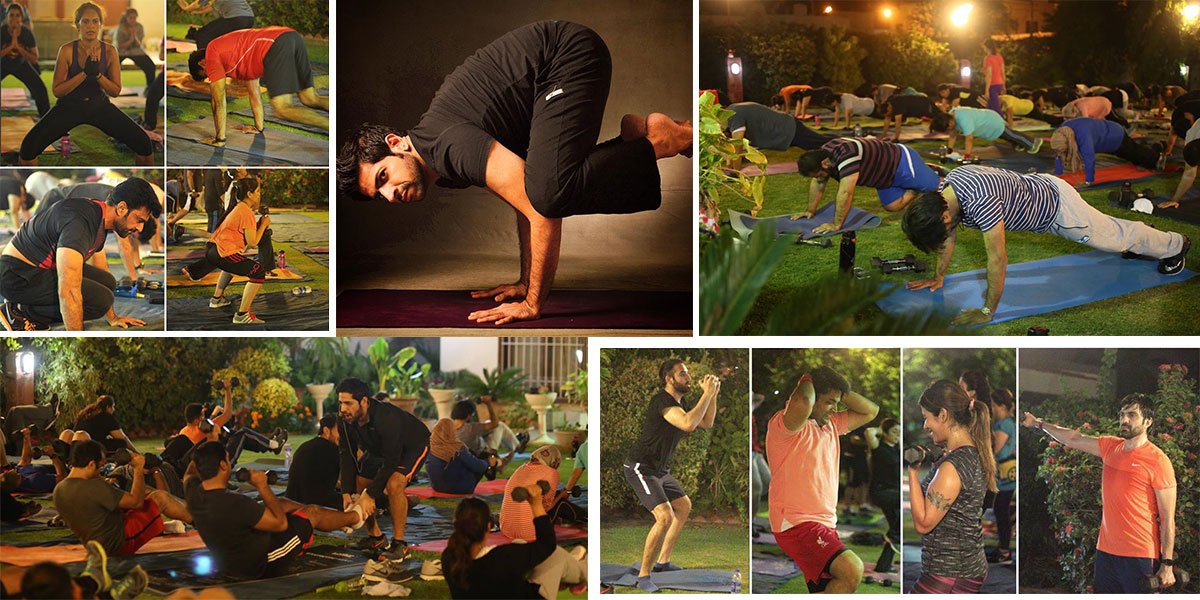 Looking for a fitness kick-start? The AQ 30 Day Fix promises to help you lose fat and get fit. The popular program is an alternative to the 42 Day Challenge, with a smaller class size and significant portion of power yoga. But does it work? After months of no exercise, I signed up for the AQ 30 Day Fix. This is my review.

The AQ 30 Day Fix is a five-days-a-week, five-week program with a 45-minute work out every day. Mondays, Wednesdays and Fridays combine HIIT and strength training while Tuesdays and Thursdays are for power yoga. 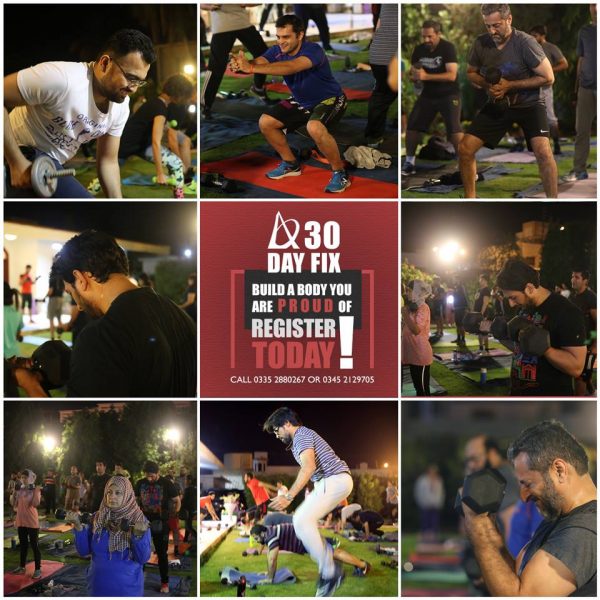 They also give you diet plan that aims to help you lose fat. The plan recommends smaller portions, fewer carbs and sugars, and plenty of protein – though it’s not an Atkins-type diet by any means. Weight loss wasn’t my goal so, on the instructor’s recommendation, I simply upped my intake of protein and ignored the rest of the diet plan. That said, I do tend to eat fairly healthily anyway. Mainlining parathas or burgers is just not an option if you’re trying to get fit.

Although I’m not fat, I basically had little stamina and the muscle tone of a wet noodle. I was NOT looking forward to the Fix and envisioned struggling to keep up in a class of super-toned fitness freaks. Luckily the class was not that intimidating though it certainly was challenging. Five weeks on, I’m not super-fit – but I’m fitter, more flexible, stronger, and inspired to keep exercising.

Aqil Amin himself teaches at his home in KDA but other instructors lead both the mixed and ladies sessions at his studio on Zamzama. I did my session at Zamzama in the 8 a.m. mixed class so my instructors were Sameer Syed for the HIIT and Strength Training and Sara Quettawala for power yoga.

We had an interesting mix of people in our group – several newbies like myself as well as people on their second or third AQ Fix. There were also some regular exercisers looking for something new. Though I could barely make it through the first class (even though Sameer insisted he was going easy on us) there were several people who were even less fit than me. As mean as it sounds, knowing that I wasn’t the worst made it easier to keep going!

The HIIT/Strength training classes consisted of a mix of short bursts of cardio (sprinting on the spot, jumping jacks etc) interspersed with squats, lunges and the use of free weights. There were a LOT of burpees and many moves based on the plank and press-ups – which were a nightmare as I have very little upper body strength and could barely hold a plank for 5 seconds at the start of the Fix. They encourage you to lift weights (2kg is the lightest they have and they want everyone to be lifting at least 3kg if possible). The majority of the exercises (and the yoga) are geared towards a strong core, though you do achieve total body conditioning overall.

Although I could barely get through a session at the beginning, at the end of five weeks I sometimes felt that I must be cheating. It all felt so much easier, even though Sameer had amped up the workouts considerably. The last session with Sameer was a mega 550 rep work out with 50 burpees, 50 squat presses, 50 russian twists etc – a total of 11 tough exercises and 50 reps of each within 45 minutes (with time for a warm-up and stretches afterwards). Although many of us indulged in some extremely creative counting, most people managed to keep up.

I found the power yoga a lot of fun, though many of those who’ve never done yoga found it especially hard. Most of the moves were beginner to intermediate level with a lot of emphasis on strength poses such as the plank, chair pose and boat pose. The men in the class struggled more with the flexibility poses and could be relied on to add comic relief with their sound effects (the louder the grunts, the more we knew they were struggling!)

Sara did encourage us try some more complex balancing poses, such as the crow, and Aqil let Fixers take his Saturday yoga class which is more intermediate to advanced level. After an intense session of flows, Aqil helps the class through more complex poses, with everyone working at their own pace.

By the end of five weeks, I could see plenty of benefits. In the first few days, I struggled with my energy levels though I wasn’t following the recommended diet plan at all. I wasn’t used to the increased level of activity and, though I was fine during the day, I found myself exhausted by evening. Within a week, this passed and I found I generally had more energy than I did before I started exercising.

I found my strength and stamina increasing but it was basically a case of doing as much as I could and just NOT STOPPING, as the workouts were always harder than I could manage. Working out in a group has an energy of its own and it helped that there were several of us struggling in the same boat. I pushed myself harder than I would by myself and ended up doing more than I imagined I could.

There were fringe benefits too. I was drinking lots more water, which meant my skin looked great and (TMI here) my constipation almost vanished – which had a knock-on effect of reducing the reflux that occasionally makes my life miserable.

It wasn’t all great though – the program does have its shortcomings. With 30 people in the room, it wasn’t always possible for the instructor to keep an eagle eye on everyone. The KDA session apparently has 80 participants, although they have two instructors there. I spotted one of my fellow Zamzama fixees doing deadlifts with a terrible posture on the last day – by which time someone really should have helped him adjust his stance.

I really struggled with getting the plank right and, since many of the moves are based on the plank, this was a real issue. I assumed it was just my upper body strength but eventually googling for help, I found several minor adjustments that made all the difference. To be fair, Sameer did continually tell us to engage our core but since many of us did have a problem holding a plank correctly, I think more time should have been spent getting that basic posture down.

Though Sameer was always ready to answer our questions and help us modify moves where necessary, we didn’t always know when we weren’t doing something quite right. There are no mirrors in the studio so it’s impossible to check your form and newbies in particular need more attention to make sure that they don’t do themselves an injury. Sameer would pace the room and help people adjust their posture but I still think there was plenty of room for improvement.

One other drawback of the 30 Day Fix that I must mention is the fact that they don’t seem to use standard names for a couple of the yoga poses. The pose I have heard called “cow” by every other yoga instructor is called “cat” by this program. I was used to the variations by the end of the program but I found it very confusing at first.

Why Aqil Amin himself has developed a cult following

I noticed a huge difference in the two classes that Aqil Amin took himself in Zamzana: one HIIT class and one yoga class. He has an insane amount of energy and spends the entire time roaming the class. He adjusted people’s posture a lot and would pick on people to turn around and lead the class through a move. You don’t slack off on a set when you know the whole class is watching you!

When he was taking the class he kept everyone engaged: making sure that we were keeping our knees up when jogging on the spot, reminding us to keep our shoulders down when lifting and basically making us laugh through some of the most difficult sets. His yoga was also great because there was a huge element of mindfulness and relaxation even though we still did plenty of strength poses. Both classes he took were so good that I wished I could make it to KDA on a daily basis to take his classes.

On balance, it was totally worth it….

Other than the minor quibbles, it is an excellent program and one that I would probably repeat. My stomach is flatter and I can see the vague beginnings of some definition on my abdominal muscles. My upper body strength is also much better: I can hold a plank for a minute if I rest briefly in downward dog midway and I’m up to using 3kg weights even though I can still only do half a press-up.

My fellow fixees were similarly upbeat, with most feeling they had made progress. One guy who’d previously done the 42 Day Challenge preferred the 30 Day Fix because he said this was more personal and less monotonous. There were hundreds of people at the 42-Day challenge so he felt he got more personal attention here. Also the workout at the 42-Day challenge doesn’t vary much whereas both Sameer and Sara varied the workouts quite a bit. Another guy liked the Fix because he felt so much stronger,

“I’ve always loved to play cricket for fun with my friends but I didn’t realise how much my lack of fitness was affecting my game. I can play for longer, don’t tire as easily and enjoy my cricket much more now,” he said. 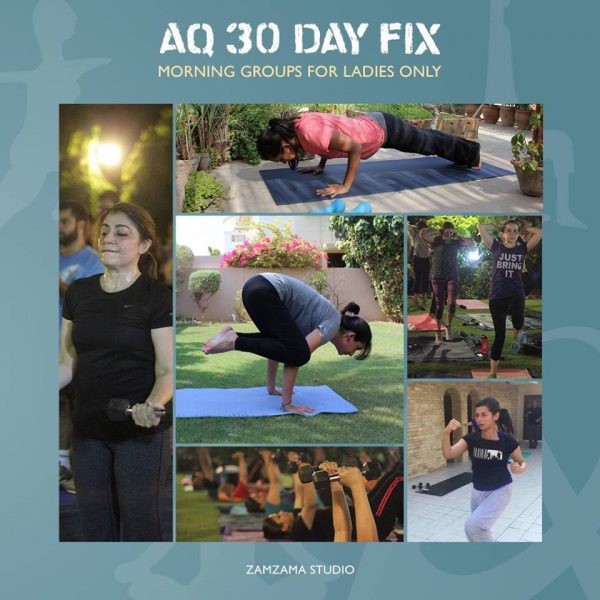 It’s been a couple of weeks since my session ended and I’m managing to work out thrice a week. I don’t push myself quite as hard as Sameer and Sara were pushing us and I have focused on different elements in my workouts. I have added more cardio to my workout and my yoga is more about flexibility and balance than strength. I do still lift the 3kg weights but I haven’t done a single burpee since the Fix ended. But that’s just temporary – I’m planning to sign up for another fix in a month’s time.

The 30 Day Fix costs Rs15,000 although there is a discount for early birds and groups. You can find them on Facebook here. I paid for my session, was not paid anything to write this review and have no affiliation with the program.