Chef Mehboob shows how to make oyster chicken at home 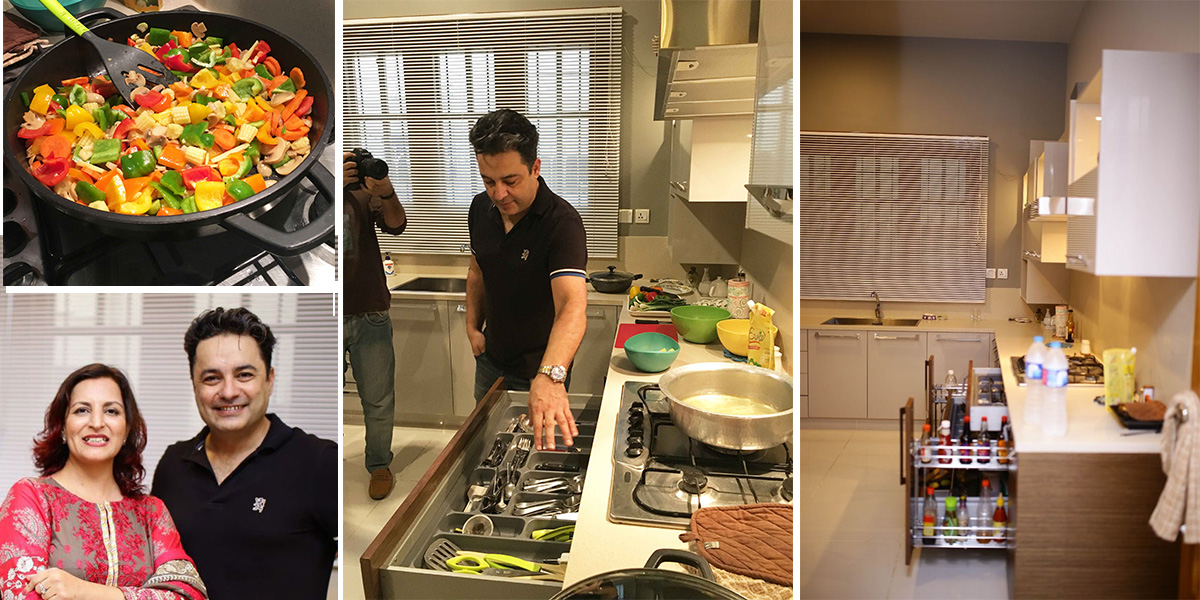 Interwood recently helped their client Shazia Ahmed Faraz celebrate her brand new kitchen by inviting celebrity Chef Mehboob to give a demonstration in Shazia’s kitchen. Chef Mehboob is one of Pakistani televisions biggest culinary stars. He was one of the judges on Masterchef Pakistan and his vibrant personality and delicious, healthy recipes have gained him a firm fan following. Shazia invited some of her closest friends to watch as Chef Mehboob cooked oyster chicken in her new Interwood kitchen.

“I was so excited to have this opportunity,” Shazia enthused. “My friends and I are all huge fans of Chef Mehboob and it was such as honour to have him actually cooking in my kitchen.”

There’s a reason that Chef Mehboob comes across so well on camera – in real life he’s very charismatic yet humble with a true passion for food. Endlessly patient, he answered dozens of cooking questions as he put together a restaurant style oyster chicken dish with surprising ease. It’s a dish that looks and tastes more complex than he made it look. His recipe comprised simple steps that he interspersed with tips on how to achieve the best results.

Although Shazia’s kitchen is spacious, it is not as big as a professional kitchen. Chef Mehboob was particularly impressed with Interwood’s clever use of space, with custom shelves in corner units, cooking utensils conveniently stored in drawers under the hob and cooking sauces in a handy pull-out section.

He started the dish by tossing cubed chicken breast in flour and salt and then frying it for 5 minutes. He recommended not frying it for any longer to avoid over-cooking, which can result in a rubbery taste,

“Don’t wait for a specific colour – five minutes is long enough to cook the chicken through at that’s all you really want.”

He then stir-fried an appealing mix of vegetables; baby corn, mixed peppers and mushrooms with garlic and ginger adding the chicken and oyster sauce when the vegetable were cooked but still crisp.

“Remember that the best food is incredibly simple – let your ingredients shine,” he advised.

Shazia and her friends asked him about foods as varied as pizza and desi favourites. For pizza he recommends a very hot oven, as high as it will go, as he believes pizza is best cooked quickly.

“If you’re making your own dough, make sure your yeast is fresh and don’t forget, getting a payra from the tandoorwala is always an option. As far as desi food is concerned, there are no shortcuts – masalay ko bhuna zaroori hai,” he commented.

Chef Mehboob started off his career cooking in five-star hotel kitchens around Pakistan, rounding off his training with a course in Germany. He’s had a range of his own shows on TV and currently has a show called Dawat e Mehboob on Ab Tak.

Shazia and her friends were full of praise for the young chef,

“It was fascinating to see Chef Mehboob work his magic up close. I’m definitely going to try his recipe at home,” enthused one of Shazia’s friends.

Interwood’s team was pleased with the event and the close-quarters engagement it offered,

“Chef Mehboob really showed how our kitchens are functional as well as beautiful. We use the highest quality fittings and appliances, paying close attention to aspects that will make our customers enjoy using their kitchen daily for years on end. This is the first is series of events where we go beyond the conventional to demonstrate the beauty and practicality of our designer kitchens. We are grateful to Mrs Faraz for hosting the event and hope she enjoys using her new Interwood kitchen,” they said.