Dekh Magar Pyar Se was a movie that I was really looking forward to. Sikander Rizvi and Humaima Malick look so good together and the promos ooze a slick style that promises much. Unfortunately the film fails to deliver.

DMPS was a disappointment on so many levels. It’s been sold as a romantic comedy but it fails to engage the audience, with a poor script and weak direction. A romantic comedy needs more than smoldering looks for you to want the couple to be together. The second half is noticeably better than the first and shows the kernel of what could have been a good film, with better writing and direction.

Dekh Magar Pyar Se tells the story of a naive aspiring hero, Sikki, who drives a rickshaw for his uncle’s company. He encounters the fascinating Annie one night and his life takes a new turn. Part romance, part comic caper, DMPS suffers from a patchy story line that only really starts to come together in the second half. In fact the first half is such a kaleidoscope of disconnected (though beautifully filmed) scenes that it’s difficult to piece together any sort of story at all. Part of this is deliberate, the film seeking to intrigue and confuse, but the entire section is prolonged to the point where the audience loses its patience.

In some respects, Asad ul Haq’s background as a director of commercials is evident. A commercial spins a story through images, with much left to the imagination of the viewer. Many parts of the first half have the same feel, as if several advertisements had been cobbled together – though the actual branding in the moving remains mercifully in the background except for an excruciating Sprite scene. Asad ul Haq also makes too much use of imaginary sequences and asides to the camera, particularly in the first half.

The cinematography of DMPS is difficult to fault – it’s truly stunning. From gorgeous shots of Lahore to virtuoso close-ups of both actors and the set, the film is a visual treat. The brilliant cinematography may actually have become a drawback for the film. There were so many fabulous shots that the director seems to have been loth to consign any of them to the cutting room floor. The self-indulgent inclusion of so many stylized scenes means that the story proceeds at snail’s pace. We may enjoy looking at beautiful visuals of Humaima and Sikander but they don’t help us engage with the characters or become involved in their story.

The pace finally picks up in the second half of the film better, with the feeble threads of storyline coming together. There are amusing cameos from Humayun Saeed, HSY and Meera and finally some clarity in the storyline. The story still jumps about though. Comic scenes between Sikki’s friend Pappu and his chacha seem to have been tacked in without sufficient continuity. Most of the comic scenes feel slightly forced and don’t flow naturally within the film. Similarly the scene with Amna Ilyas Kaala Dooriyan song seems to have been added on perforce.

Veteran comedian Irfan Khoosat does his best as Chacha, but struggles with an inadequate script. Humaima Malick looks superb and captures the mercurial Annie well. Her depiction only shows flashes of complexity in Annie but her quick changes of mood and masterful handling of Sikki are brilliant. Sikander Rizvi gives a patchy performance in his debut movie, though he does show flashes of acting ability. He is awkward at times and there are expressions that he perhaps overuses, but at some points he slips seamlessly into plausibility. Given more experience, Sikander has shown that he has it in him to be a good actor. The lack of self-assurance in Sikki that may have come from the actor’s own experience, but it somehow serves to give depth to the character, and contrasts well with his more confident spells. 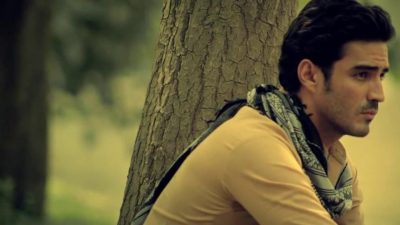 In terms of styling, the film can hardly be faulted. From the sets to the props to the way the outfits were worn, everything comes together beautifully. The only minor crib is that there were too many HSY outfits – totally understandable given that HSY was on board as one of the stylists. Luckily HSY is one of those designers with enough versatility to pull off an entire film. However, he has a very strong signature and it would have been good to see more of a variety of designers in the movie. That said, the fish-tail lengha he created for Humaima Malick was superb and his various outfits for both Humaima and Sikander were polished and chic.

At the end of the day, DMPS is a triumph of style over substance. You can see the effect that director Asad ul Haq was aiming for, but ultimately the dreamlike stylized direction didn’t fit the story. If Dekh Magar Pyar Se had been a haunting love story, the visuals would have fit perfectly. As a romantic crime caper, the pace is all wrong and there is insufficient plot and character development. Worth a look simply for the beautiful cinematography and styling, but do stay beyond the interval no matter now nonplussed you may be by the first half. The second half is definitely more rewarding and gives you a sense of the movie DMPS could have been.