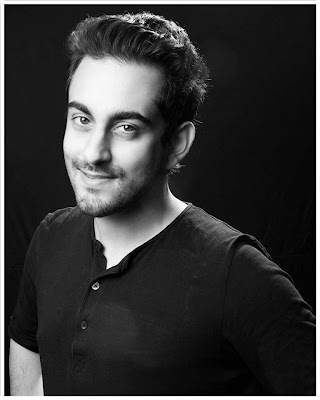 Fall in love with Bilal Khan all over again with his new song Dou Gharee. Upbeat and romantic, Dou Gharee is a world away from the raw tormented ballads that launched Bilal Khan as a pop sensation. However, unlike his some of his subsequent songs, Dou Gharee has the same soulful vibe that characterizes previous hits “Lamha” and “To Kiya Hua”.

The video for the song, featuring the gorgeous Annie Ali Khan, was released earlier this week and is as inspired as the song. Telling the tale of two musicians falling in love in New York, the video is beautifully shot yet unpretentious. Featuring Times Square, Central Park and the Subway the project somehow manages to avoid touristy clichés and draws you in.

The video is something of a family affair, codirected by Annie’s husband Sofian Khan and their close friend Mehreen Jabbar. These three have also worked together on a video for Jal and their level of expertise helps showcase Bilal’s music at a new level. Both Mehreen and Annie spoke of the camaraderie and chemistry they felt while shooting the video. Their enjoyment of those summery New York days shines through in the video.

Mehreen was full of praise for the catchy, ‘feel good’ song while Annie agreed that it has a special energy. Both enjoyed working with Bilal who is very down to earth despite having shot to fame in a very short span of time. According to writer and model Annie, Bilal has a great attitude,

“Part geek, part artist, part entrepreneur and part social media junkie. At least these are the sides I saw while working with him and I could totally see his complete commitment to his art—which is his music yes, but much more. He is involved in the entire process and it was amazing to see that.”

Bilal Khan got his big break by being picked for Coke Studio Season 4 following the viral success of his debut song “Bachana” on YouTube. From being a guy singing under a tree at LUMS, he went to being the artist with the most successful song on Coke Studio with “To Kiya Hua”. Fans adored the young angst-ridden singer with his cool Bollywood-star looks, melting voice and haunting lyrics. He was picked up for a Jazz Mobile ad, signed with a record label and got a deal endorsing Levis. He’s played to packed audiences at concerts in Pakistan and around the world. Meanwhile he also acted in a telefilm for Hum TV and was nominated for a LUX Style Award for his debut album Umeed.

A second season at Coke studio was successful but less stellar. His songs were more optimistic but somehow lacked the soul of his previous offerings. With Dou Gharee he seems to be right back on track, with the added advantage of the more professional production that his fame has enabled. Bilal Khan has always been an excellent lyricist and this song has the poetry of his first songs. A minor caveat is that like many of his songs, Dou Gharee feels a little short lyrically- as if it could do with one more verse. Despite this, with Dou Gharee Bilal Khan looks and sounds like the star we always knew he could be.

Share
Facebook
Twitter
Pinterest
WhatsApp
Previous articleKarachi Cinemas – Fancy a night at the movies? Check out this review of the premium cinema multiplexes in Karachi
Next articleAyesha-Somaya: Semi-Annual sale of Luxury Pret and Semi-formal Kurtas by Pakistani Designers Ayesha-Somaya draws a huge crowd