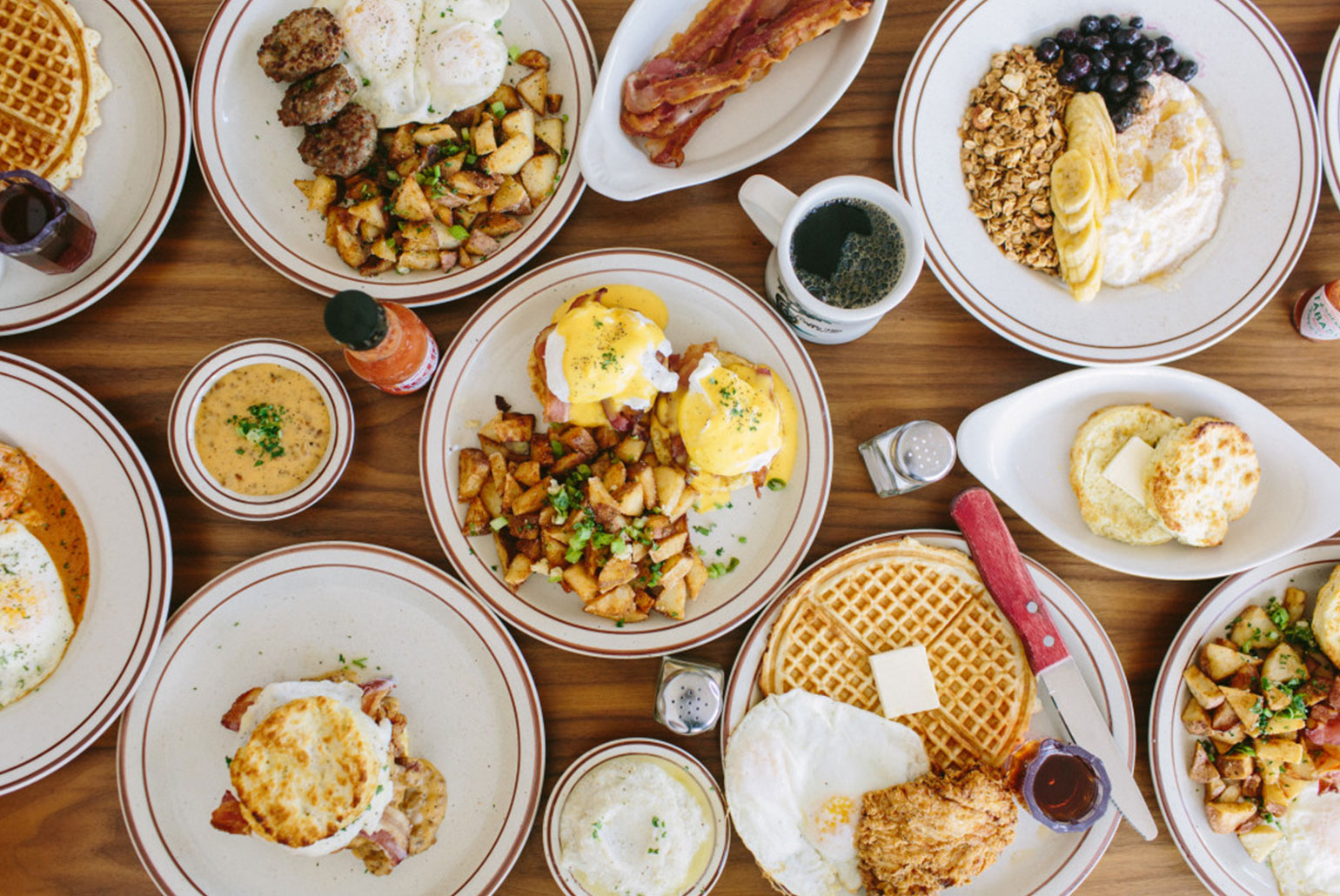 Karachites love their brunches – attending them and hosting them, alike. But let’s face it, coming up with a menu can be exhaustive. You wanna come up with ideas that are unique yet traditional and true to their flavour at the same time. Scouring the internet for recipes will only leave you more confused – there are too many out there, each one different from the one before. Here are tried and tested recipes that come out brilliantly even if you’re making them for the first time. They’ll save you from slaving around tons in the kitchen – leaving you a confident, not-so-tired host (rare!).

Let your guests know autumn is here – greet them with the smell of cinnamon and apples wafting in the air. 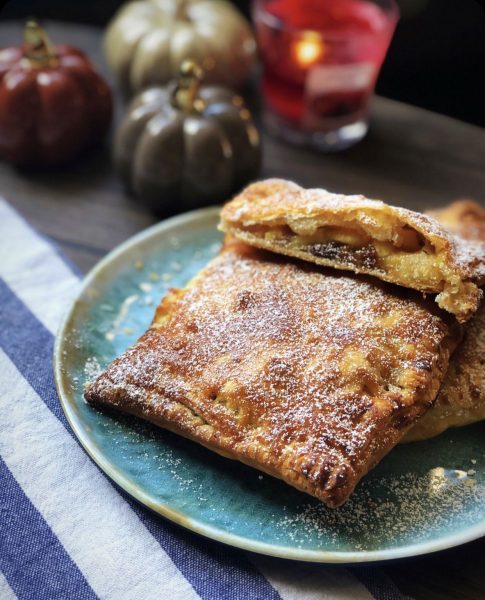 2 tbsp mix trail (or any nuts you prefer)

Throw in all the ingredients apart from the puff pastry into a large mixing bowl and mix till incorporated evenly.

Roll out the puff pastry (if you’re making it from scratch, make sure it’s cold – refrigerate it before use) on a floured surface and divide it into even squares.

Fill each square with your apple-butter-sugar filling half way. You don’t want to over-fill because the filling will ooze out and the end result won’t look as pretty.

Apply egg wash (dilute an egg in milk) along the edges of the puff pastry and pop on another square of pastry directly on top of the half-filled one. Crimp the edges with a fork to tightly seal them.

Apply egg wash across the surface of the turnover and poke holes with a fork in order to let out the steam while it cooks in the oven.

Place these turnovers in the oven for 20 – 25 minutes or until golden and flaky on top.

Serve warm with a scoop of vanilla ice cream or clotted cream.

Tip: Head over to Springs Store, Bukhari Commercial and pick up the pre-made puff pastry from their freezer aisle. It’ll save you lots of time and energy – making puff pastry from scratch is too much of a chore and there’s no difference in taste, if anything, the store bought one is flakier. Just make sure you thaw out the pastry before working with it.

Pro tip: These turnovers freeze really well. Another way to increase efficiency would be to make them ahead of time and pop them into the oven straight from the freezer. They will take 5 – 7 minutes longer to cook than the fresh ones. 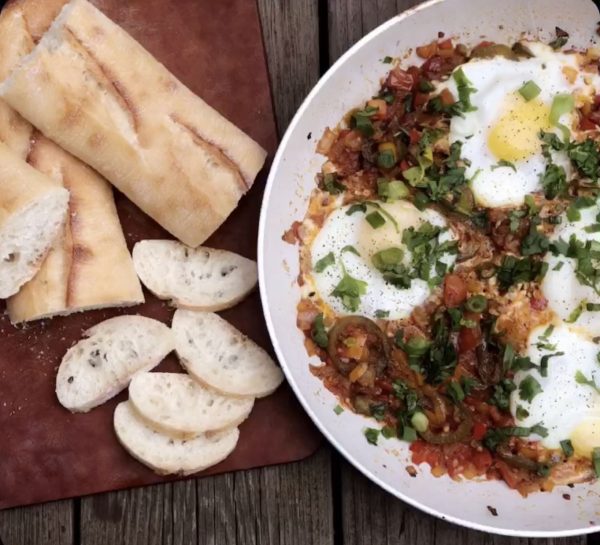 1 fresh seeded chilli (according to your spice level), finely chopped

1 medium bell pepper (can be whatever colour you fancy), diced into small cubes

1 handful of chopped parsley (coriander works well too) for garnish

Add just enough olive oil into a deep pan to coat the surface and prevent sticking and put it on medium flame. Add the onions, garlic, chopped chilli, bell pepper, chilli flakes and saute for about 5 minutes, until the veggies sweat. You don’t want them to brown because they’ll make your shakshuka look brown – you’re looking for a deep red. 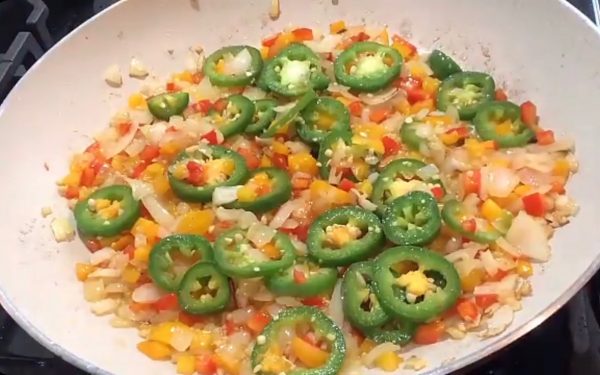 Add in your chopped tomatoes to the frying pan and reduce the heat. Simmer for around 5 – 10 minutes till the tomatoes become tender and start to form a thick gravy-like sauce. Add in a little water to aid the sauce-making process, if needed. 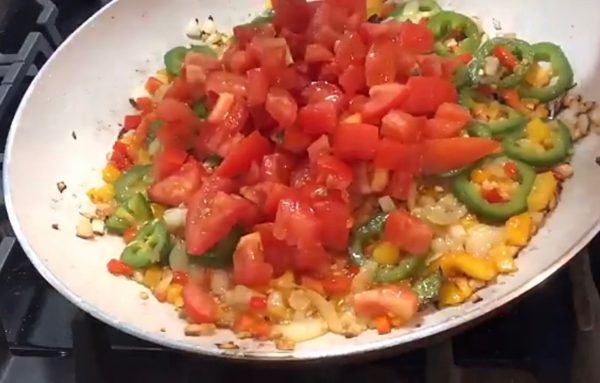 Add in all your spices and mix well.

Make little wells with the back of your spoon and crack an egg into each well. The number of eggs you crack will amount for the servings you want. Season the eggs with salt and pepper. Cover the pan with a lid and continue to cook the shakshuka for 5 to 7 minutes (or longer if you like your eggs well done).

Serve with a side of bread of your choice. 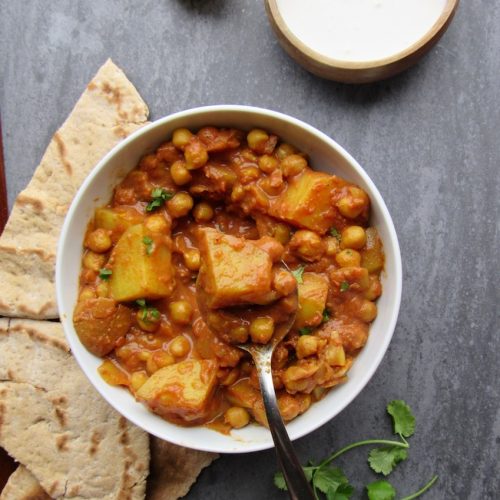 Saving the most traditional dish for the last, this is so easy and turns out quite similar to the dhaba style versions you get, with the satisfaction of home hygiene. Traditional dishes are often mistaken to be long, winding, complicated recipes that take hours – this one is quite the opposite.

A pinch of nigella seeds

A pinch of fennel seeds

In a wok, heat your oil and add in the chopped onion. Cook the onion until golden brown – keep an eye on it, you don’t want it to burn. 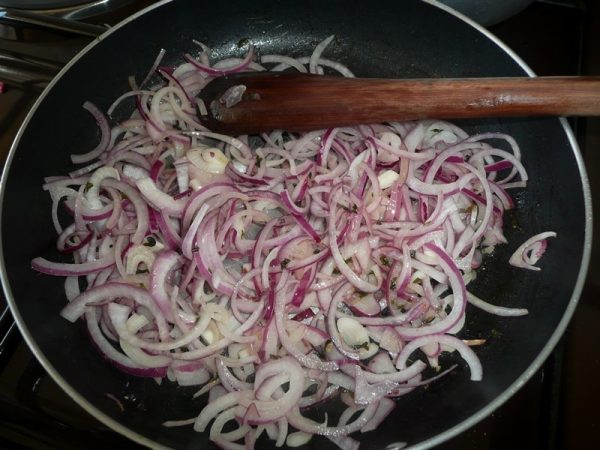 Add in all of the ingredients, including the spices, apart from the cornflour and the achaar. Add in the liquid from the chickpeas too – this is what’ll cook the potatoes. If you’re using dry chickpeas, boil them separately and add in a cup of water once you add your cooked chickpeas to the rest on the ingredients. Cook for around 15 minutes.

Once well cooked, make a cornflour slurry to thicken the curry up. Mix in your cornflour with a little water to make a thick paste. Add this paste into the curry whilst stirring, continuously – you don’t want the slurry to clump up. You might need to add more or less cornflour depending on the consistency you prefer.

Once thickened (it’ll take around 3 minutes), add in your achaar and mix well.

Tip: You could make this dish with dried chickpeas but again, efficiency is one thing every 21st century woman needs to maintain, use canned, pre-cooked chickpeas. Not only are they inexpensive but you also save up lots of time.