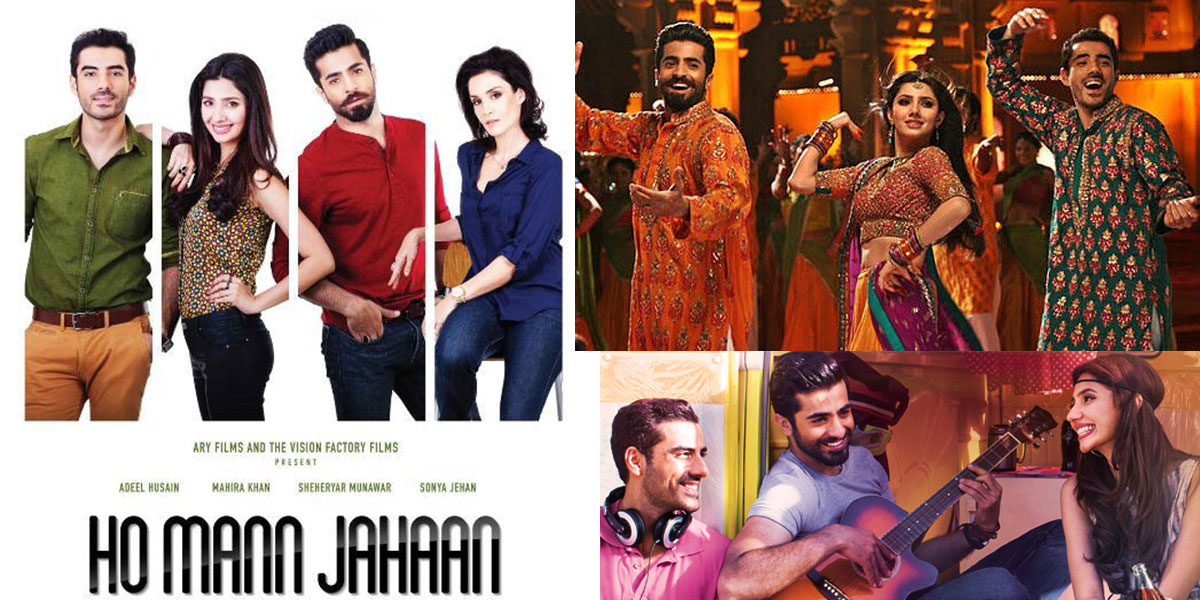 Although the concept of a review a month after a movie is released is somewhat redundant, better late than never. I FINALLY managed to see Ho Mann Jahaan and for the most part, it lived up to the hype. Asim Raza has put together a gorgeous movie with many strong acting performances. Add several excellent songs and cameos by Hamza Ali Abbasi and Fawad Khan and you have a feel-good, entertaining coming-of-age story.

The film follows the story of three friends, Nadir (Adeel Hussain), Orhan (Shehryar Munawar) and Manizeh (Mahira Khan). All students at IBA, they come from very different backgrounds but are united by their passion for music. The story focuses on their ambitions and relationships with each other and their parents.

The story is nothing ground-breaking – the themes of parental expectations and love triangles have both been explored in endless ways. However, the cast makes the most of the script and the film focuses uniquely on the sort of urban Pakistanis that we have rarely seen on the big screen before. Moreover, there are places that the story is deliberately ambiguous – Fawad Khan’s cameo being a case in point. This harks back to the golden era of sub-continental cinema when not everything was clearly sign-posted or black-and-white. Personally, I like a little ambiguity in a script or a scene that hints at something deeper without spelling it out.

There are, however, places where the symbolism is a little heavy-handed. Having Surah Kafirun playing in the background just before Manizeh asks her father to live and let live (the central message of the said verse) is just one example. Also, the beginnning of the movie where the trio are established as besties seems a little stilted – there is no flow to their interactions and they are a little unconvincing in the college scenes. Lastly and crucially, there is something one-dimensional about all the parental relationships – which must be considered a flaw when these relationships are the central theme of the movie.

Despite this all three stars turn in excellent performances, though Adeel Hussain is perhaps a little stiff in some of the early scenes. He excels in the latter half, depicting a young man at war with himself. Mahira Khan is fabulous as the music-mad Manizeh and is effortless whether she is being mischievous or emotional. However, there is a palpable lack of chemistry between her and Adeel which detracts from the story. Shehryar Munawar, meanwhile, is excellent as Orhan, displaying his passion and the grey areas in his character with aplomb. This guy’s got charisma and he can act – hopefully we’ll see more of him soon. Sonya Jehan also deserves a special mention for her small but skilfully-judged role.

The supporting cast is generally good, particularly Jamal Shah as Manizeh’s father and Nimra Bucha as her mother. There is one notable exception though. While Bushra Ansari excels in comic roles, she seemed unable to get into the role of Nadir’s mother and did not bring any nuance to her role at all. During her big scene with Nadir’s father, when she should have been showing guilt, fear, worry and possibly even self-pity, she seemed so wooden that the entire pace of the film is thrown off.

Mahira Khan, on the other hand, emotes so well that it’s sometimes a challenge for directors not to overuse shots of her. Thankfully Asim Raza reigned himself in, unlike Momina Duraid in Bin Roye, and refrained from endless close-ups of Mahira. While many recent Pakistani movies have suffered from poor editing, Asim Raza has done better than most with the editing. Though the pace suffers at some points, perhaps because there are several story arcs, the film is generally tighter than other recent releases.

The film excels in several other areas. With three gorgeous leads, artistically styled sets and excellent cinematography, this is a visually beautiful film. It’s a joy to see a brushed-up version of Karachi on screen, rather like the pristine version of India that Karan Johar side of Bollywood sells, with locations that one can instantly recognize. This may not be what “serious” film lovers like to see but I’m all for some celluloid magic. From Café Flo to DHA Golf Club to the PNSC Building, this was Karachi given the silver screen treatment. Even the less affluent area where Orhan lives is stylized – perhaps its not authentic, but I think cinema deserves a little poetic licence. The wardrobe, by Ismail Farid, Umer Sayeed and others, was similarly on point. Add Asim Raza behind the camera and you have visual treat. From the way the light bounces off the water in the IBA water-fight to the stunning set built at Frere Hall for the “Shakar Wandawaan” song – this film upped the ante in terms of production values.

Ho Mann Jahaan is a solid entertainer and a great start to the year for Pakistani film. There are dozens of films in the pipeline and hopefully this year will see  Pakistani cinema continue to improve.