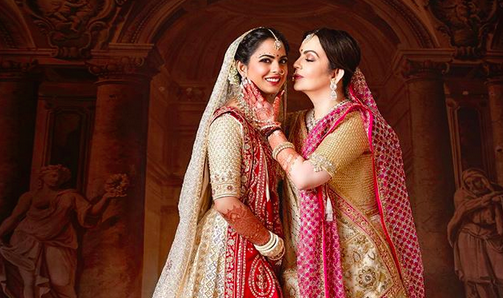 This is a late, late post because well, we weren’t sure the wedding was really over. After all, DeepVeer had a reception like a month later! If you were following the biggest fattest Indian wedding of the year, you’ll know that Isha Ambani, the daughter of Mukesh and Nita Ambani, got married a couple of weeks ago in a slew of events that spanned from Udaipur to Bombay. From Shahrukh Khan grooving with Hillary Clinton on stage to Amir Khan and Amitabh serving the Baraatis to a concert by Beyonce, this wedding was next level.

It doesn’t get more epic than this … #ShahrukhKhan himself leading a round of #ShavaShava at #IshaAmbani’s sangeet last night ? #Repost @filmfare ・・・ @iamsrk makes everyone go Shava Shava at the pre-wedding celebrations of #IshaAmbani and #AnandPiramal #indianwedding #ambaniwedding

Of course, being totally style obsessed, we were glued to our insta screens to check out all the outfits and looks. The celebrity style spotting bonanza deserves a post of its own but we had to start with a post on the bride’s style. From the duas to the dandiya night, from the sangeet to the receptions (yes, plural receptions), we couldn’t take our eyes off the bride and her mum. The super-rich duo stuck to three main top Indian designers for their wedding looks – Sabyasachi (who else!), Abujani Sandeep Khosla and Manisha Malhotra ..though Isha did get Valentino to design their first ever lengha especially for her!

Of course, it wasn’t just about the outfits – it was the hair, the makeup and the jewellery too. Apart from that permanent slightly surprised look on Nita’s face, whoever has worked on her face has done a pretty good job. Isha’s dewy fresh makeup was a definite win (we’re thinking there were probably extensions adding oomph to those lustrous locks but they were flawless). The jewellery we were a bit disappointed by to be honest. Lots of big, big diamond necklaces – but there were too many ice-cubes-strung-together type sets and not a single piece of jewellery that we lusted over from a design point of view. But lets not get ahead of ourselves – here’s all of Isha Ambani’s wedding looks .

So the first looks we saw from Isha Ambani were from her Graha Shanti Pooja and from a Dandiya night.

Lenghas are clearly Isha’s thing – she didn’t opt for a sari or any other silhouette throughout her wedding. We loved the understated feel of the hair and makeup and the tapestry-like charm of the Lengha but we’re not feeling the jewels at all. OTT.

Both Isha Ambani and her mum Nita Ambani plumped for one of our faves for the dandia night – Abujani Sandeep Khosla. Their work is steeped in artisan embroidery and encompasses chikankari, gota work and traditional embroidery. Sheesha work is super popular right now and these colorful outfits combine mirror work and threadwork.

We found this look a little busy on Nita. Taking a closer look at her necklace, it looks like some sort of polki perhaps? Isha is wearing a similar style and so is Jaya Bachchan ( though hers is so huge that only a very understated sari like the one she’s wearing could possibly ever work with it!) We saw a similar piece on Shloka Mehta but we’re not fans of the look. Are these necklaces antique? They may be as expensive as hell but they don’t really complement anything – not clothes and not the wearer.

Strictly speaking Udaipur was not her wedding, it was also pre-wedding with a sangeet that featured Bollywood royalty and ended with a Beyonce concert. If you can’t be that extra when Daddy’s a billionaire, what’s the point? Isha chose

Isha chose pink Manish Malhotra for her Maha Arti. This was a killer hair and makeup look – a simply perfect no-maleup look. Over made-up brides take note! Jewellery-wise, personally we would have preferred to see some coloured stones in some of the jewellery and more variety but maybe they just preferred this type? For the evening Sangeet, Isha chose Manish once again – another lengha but this time in gold with a more flowing sihouette. Nita Ambani meanwhile also chose Manish Malhotra for both events. Both outfits were very elaborate but beautiful.

Back in Mumbai for the actual wedding, Isha Ambani chose AbuJani Sandeep Khosla for her big day – as did her mum. Isha had her mum’s chunri wedding sari reworked as a dupatta to wear as a tribute to her mum on her wedding day which we thought super sweet. This was the only time in the wedding that Isha wore her hair up but it looked great – the jewels also complementing the look beautifully.

Nita Ambani’s outfit mirrored her daughters a little too closely we felt. We get that they were supposed to complement each other but rule number one of any wedding is “don’t upstage the bride”. While Nita didn’t upstage Isha precisely, we feel her wearing something so similar took away from Isha’s look somewhat – though that pic of her kissing her daughter is priceless.

For her reception (not the “big Reliance one”), Isha wore Valentino. But not a gown or something fusion – she got the renowned Italian couture house to make her ….a lengha. We still can’t decide if that was a coup or ridiculous – it was a beautiful lengha no doubt but why get an Italian couturier to make an Indian outfit?

Oh and you may have missed it because this pic was released later but Isha did wear a Valentino gown during her wedding celebrations too – apparently this was on the eve of the pre-wedding event in Udaipur : a pretty silver gown that she accessorized with a stunning pendant. Nita meanwhile chose Abu Jani Sandeep Khosla again – keeping to the same gold tones that Isha wore but softening them with a pale pink dupatta. Her jewellery was one of the most elegant pieces she wore and this was one of our favourite looks from Nita Ambani during the wedding. Btw we loved the Sabyasachi outfit worn by daughter-in-law-to-be, Shloka Mehta but there’s that bizarre jewellery again …it doesn’t go and it’s not flattering. Watch this space while we ask one of jeweller friends about this style.

That wasn’t the end of the major wedding celebrations – there was a big Reliance reception too for which both Isha and Nita chose Sabyasachi. Most of the pictures are studio portraits with stylised lighting but they look spectacular. The one picture of Nita in bright lighting makes the outfits look a tad less opulent but it was still a striking look.

So which was your favourite look from Isha Ambani – and do you think the way Nita’s outfits mirrored Isha’s was cute or OTT?