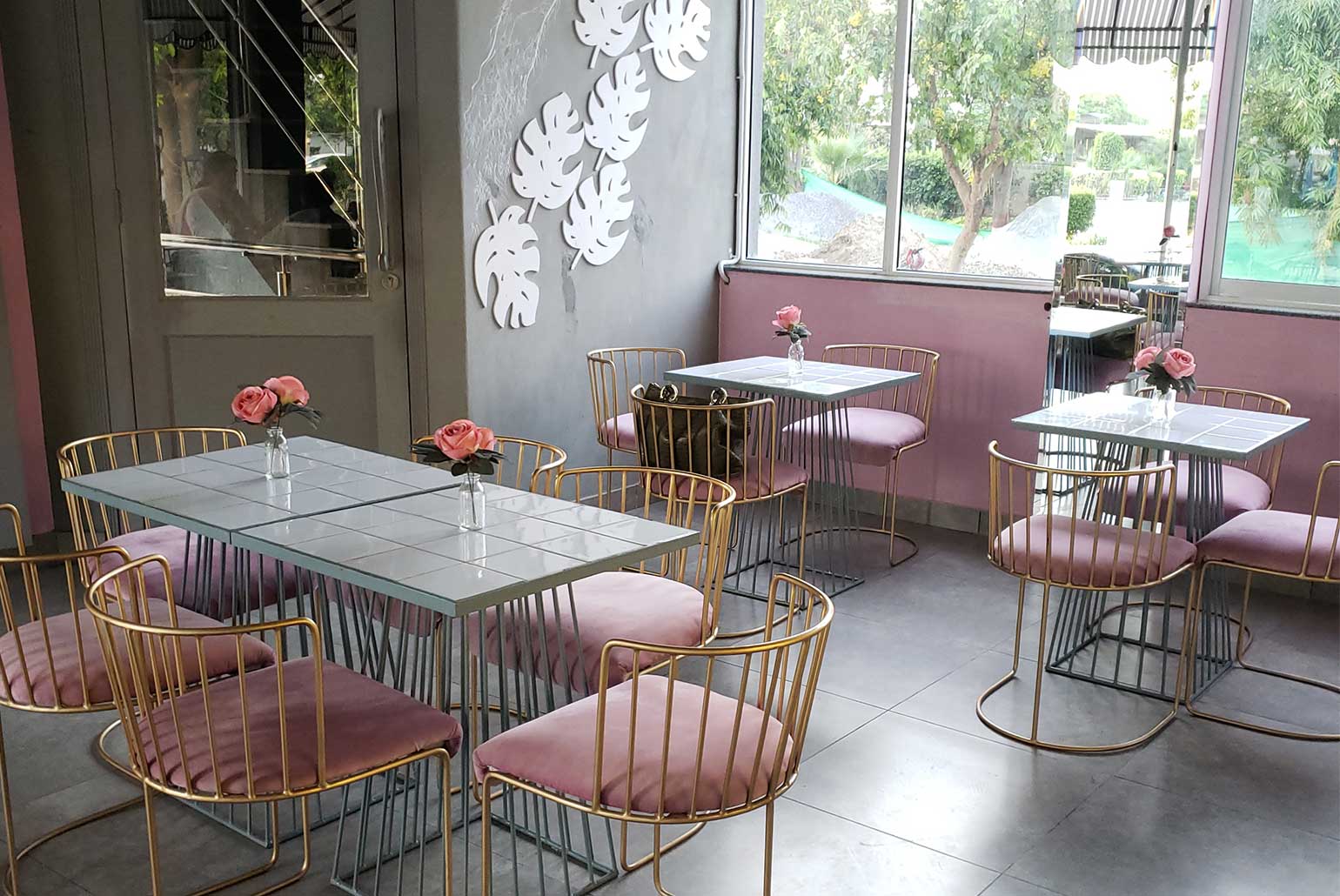 Walking into De`ja is like being transported to another continent, thousands of miles away, in some quiet nook of France. The no-fuss décor of the place, with its clever yet subtle touches that give off Parisian vibes is just what you need on a stifling hot afternoon when the goal is to enjoy some delectable food without the usual boisterous crowd and overly loud music that is part and parcel of the Lahori restaurant scene. 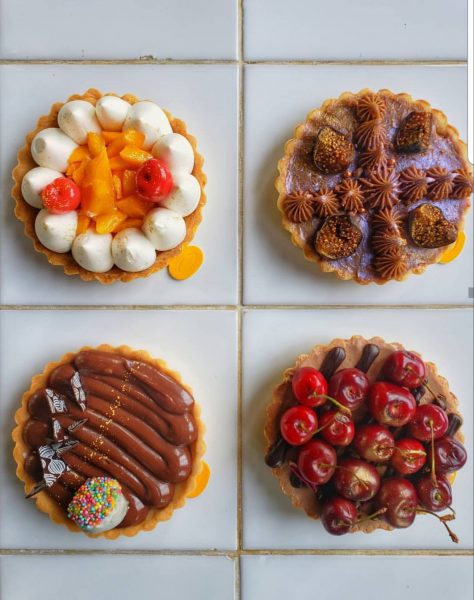 The café is done in soothing tones of grey and pink, with splashes of white on the walls and floors that add just the right amount of brightness. Immediately on entering, your attention is drawn towards the delightful array of artisanal desserts proudly on display in a glass cabinet, ready for pickup at any time of the day. 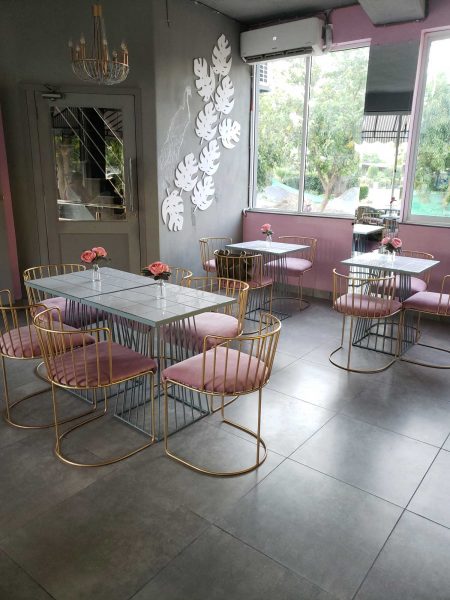 The line-up is a riot of colors and every dessert lovers dream come true. From fresh fruit tarts, to rich creamy concoctions in dainty cups to chocolate-filled ramekins oozing with caramel, there is something for everyone on offer. And trust me when I say this: you won’t be able to resist! More often than not, it is Khadija Shafqat herself who greets you in the hall and graciously shows you to a table. A familiar name in the foodies’ circle of Lahore, Khadija is chef-extraordinaire and owner of De’ja and Thanda Garam, another brainchild of hers that garnered such a loyal fan base that she was forced to open another branch within a year of starting the venture. In my opinion, her culinary genius lies in her ability of coming up with unique fusion dishes that either take you back to your grandma’s kitchen or a European vacation you took with your family. 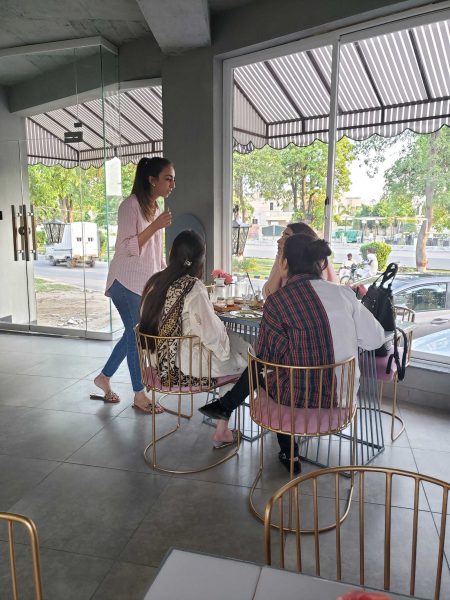 For my visit, I pick an odd timeslot in order to avoid the evening crowd but I am taken aback to see quite a few tables occupied. The fact that there are people brave enough to face the wrath of the unforgiving July sun on a weekday says a lot about the cafe’s bourgeoning popularity! While I pore over the cleverly crafted menu to enjoy my first sit-down meal at De`ja, a steady flow of customers keep coming in to pick up the readymade desserts on display. 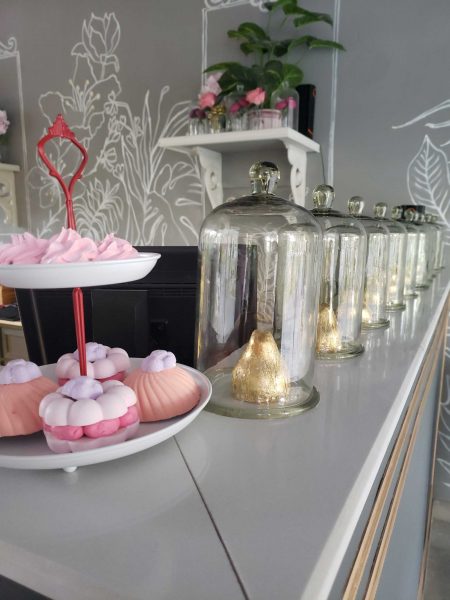 On the chefs recommendation I decide to go for Cinque, a pasta dish that sounds like a food lover’s dream come true. Made with 5 signature comfort ingredients, it comprises of riggatoni pasta stuffed with succulent, cheesy chicken topped with a sublime béchamel sauce. With just the right amount of seasoning and perfect harmony of quality ingredients, this dish is an explosion of flavors in the mouth. 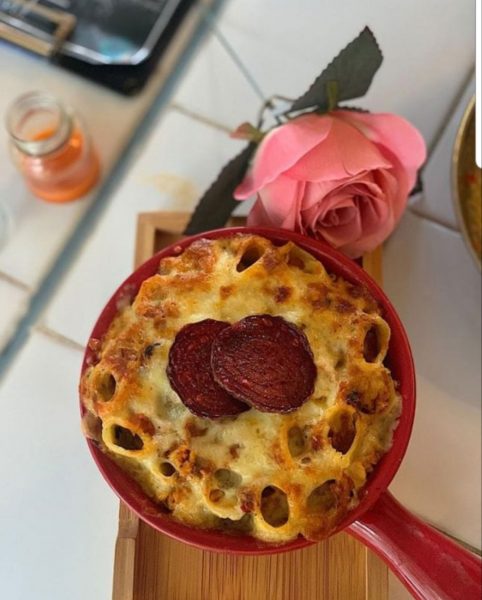 Next up, I try out the deconstructed lamb sandwich, a dish heavily inspired by our desi lamb leg roast, a staple menu item at all Eid spreads. However, the end result isn’t something for just the desi palette but a treat for any meat lover who likes their meat tender and cooked to perfection. Laid out on freshly baked brioche bread and smothered with cheesy mushroom sauce, served with a side salad of arugula, red cabbage and caramelized onions, it’s a perfect example of a fusion dish. 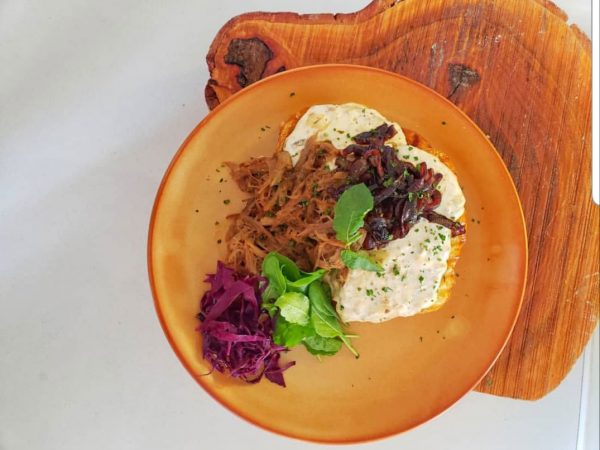 By now, I am stuffed to the brim but not ready to give up just yet! No meal is complete without dessert and coming to Khadija’s restaurant and not trying something sweet is nothing short of blasphemy. It’s a tough call to narrow it down to only 2 desserts from the long list of sweet temptations on offer but I decide to order the signature French toast. 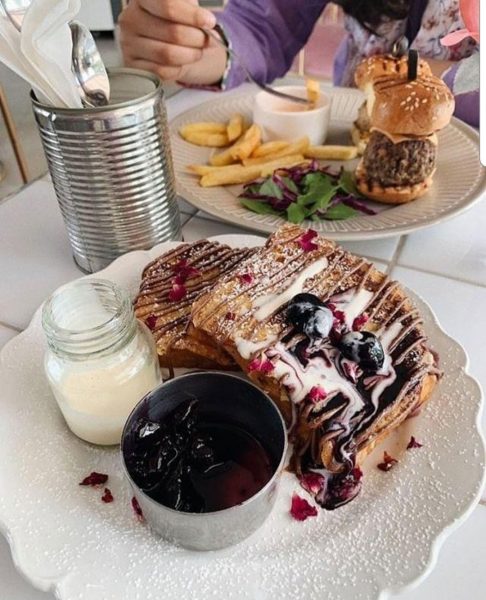 When it arrives, it’s like heaven on a plate! Soft, fluffy and fried to a beautiful shade of golden brown, the French toast is accompanied by a mixed berry compote, honey cream, hazelnut spread and sprinkled with edible flowers. The sweetness of the bread is wonderfully complimented by the tanginess of the berries and the first bite is enough to induce a food ecstasy! Next up, I try the Tres` Leche cake, which is super moist and just melts in your mouth! However, it’s the clever play on textures that elevates the dish into a sure-shot winner with the silky sponge, crumbly cookie base and fresh fruits. 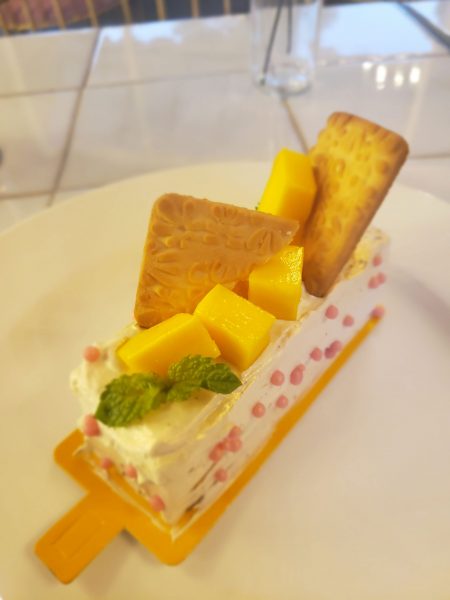 A special mention also needs to be made about the extensive beverages menu which reads like an exotic roster of tantalizing drinks. Upon Khadija’s insistence, I try out the strawberry lemon potion, mango lotus shake and strawberry slammer. Full marks need to be given for presentation and the theatre involved in mixing the drinks turns it into an experience worth trying. 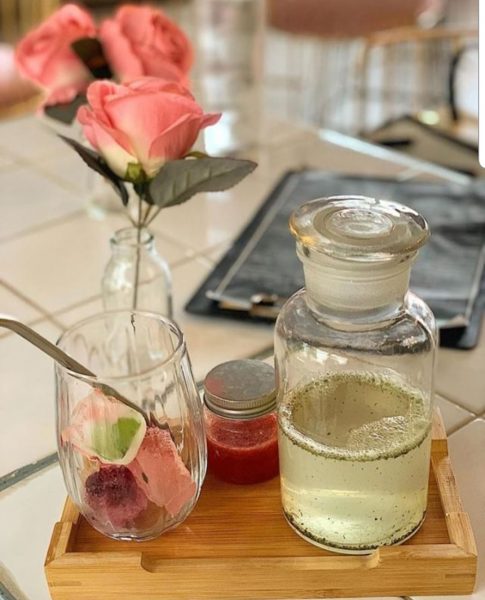 All in all, in my opinion De`ja is definitely a must try. It’s got something for everyone and with its creative spin on an otherwise typical menu, you won’t leave the cafe disappointed.  However, I do feel that the menu needs to be extended to include more entrées and dessert options. Khadija assures me they are in the process of developing more recipes that need to pass a rigorous taste-test criterion before being officially added.  Here’s hoping they get incorporated before my next visit, which I have a feeling might be sooner than later!