Ocean’s 8 is an American comedy heist film, acting as a spin-off or sequel of the renown Ocean’s trilogy. The film pioneers an all-women star studded cast. The film features: Sandra Bullock, Anne Hathaway, Rihanna, Awkwafina, Helen Bonhamm Carter, Cate Blanchett and Mindy Kahling. The lurch towards ethnic representation in Hollywood is evident in the casting of this film. The plot is centered around a highly sophisticated, multi-million dollar heist staged at the annual Met Gala in New York City- what follows is a excellent fusion of fashion and crime. 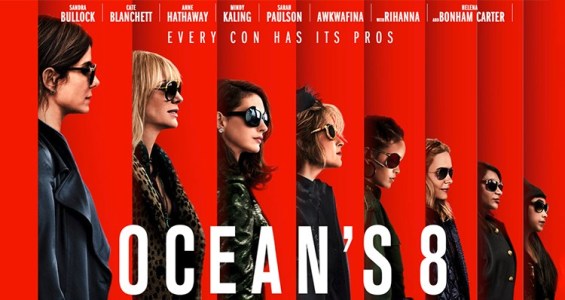 Although the plot has the predictable routine, the general sloppiness of the production is offset by the captivating performances of the actresses. Bullock’s excellent wardrobe choices coupled with her magnetic on-screen performance was one of the saving graces of the film. It is sad to see that the unrefined script was not able to fodder the flourishing of the strong actresses casted in the film. Although the characters displayed excellent chemistry, it was evident that they were constricted by the lack of depth in the script, and remained one-dimensional mostly due to the in unimaginative direction.

Anne Hathaway and Helen Bonhamm Carter, as usual, displayed riveting performances. After watching Ocean’s 8, I was truly impressed with Anne Hathaway’s versatility – I mean from her performance in Rachel Getting Married to playing Cat Woman, Hathaway seems to fit into any and every role. Carter’s eccentric and edgy performance was at par with her unconventional character choices.

All in all, the film has a light hearted and humorous approach to a typical heist plot. Combining the glamour of the Met Gala and Vogue with a heist seems like a unassuming combination. Yet offers an opportunity to delve into celebrity culture and the fashion world. This is a cross-roads is explored through the many characteristic catechisms displayed by Daphe Kluger in the film, the almost sarcastic performance of Hathaway enables us to peak into the fashion world and see that life is not all perfect beyond the picture frame. 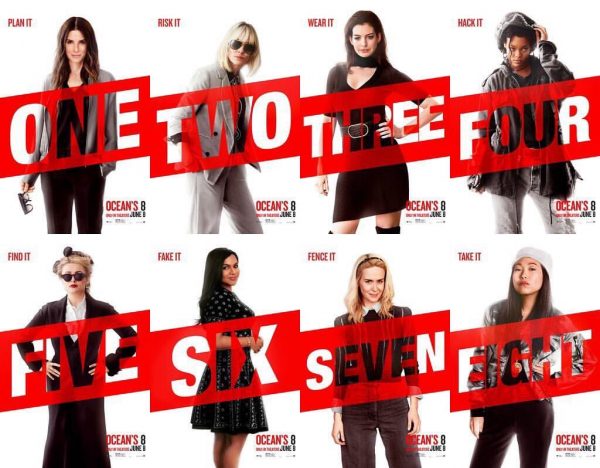 The film is definitely aesthetically satisfying, from the cinematography, costumes and design to beautiful actresses. I believe that there was an opportunity for this film to break through glass ceilings when it comes to an all-women heist cast, but due to the constricted writing, the characters remain unexplored and there is much to be desired. Nonetheless this film combines different genres to produce a chick-flick esque heist film. Who wouldn’t want to watch a film with Sandra Bullock, Anne Hathaway, Rihanna all in one?