O-level retakes due to cheats cause distress to students across Pakistan – but it could be worse. 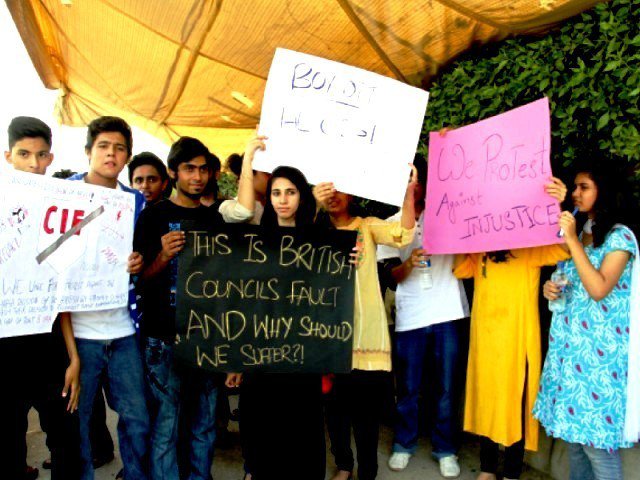 Lessons from the past: The O-Level retake is in your benefit Published in the blogs section of the Express Tribune on 5th June 2013 Every teenager who took Part 1 of his or her O-level exams this year is in a state of shock. The British Council has announced “a breach of security”. Because of a few low cheats, all students will have to retake their Pakistan Studies and Islamiyat Papers in ten days time.

Reactions range from anger to hysteria to downright depression.

Leaks are hardly new. The Matric Board exams are challenged with accusations of cheating every year and there is no doubt that the results from some centres are highly suspect. One senior citizen recalls being woken up by classmates the night before the exam to solve a paper; the paper was worth much more to the cheats if they could sell it with an answer cheat. This was back in the late 1950s.
More recently there are stories of cellphones being used in sophisticated cheating scams.

The problem of leaks is not purely a Pakistani one. In places like Zimbabwe the main local examination board Zimansec has very little credibility due to rampant cheating. The only credible qualifications in Zimbabwe are those from the Cambridge International Examination Board. However, reputable examination boards can also face issues. For example, in April this year an A-level paper was leaked online in the UK. The CIE Board also faced some minor issues in Namibia recently. What is key, however, is that in both these cases swift action was taken to rectify the situation.

The Cambridge Board isn’t immune to problems in Pakistan either. One woman who took A-levels in Islamabad in 1996 recalls that there were issues with the Urdu and English Literature papers being leaked. She remembers being offered the Urdu paper much to her indignation. Swift action was taken back then. In 1996 no retakes were offered but the entire exam center was penalized and practically everyone got a C.

The following year there was another leak but this time retakes were offered. It was stressful and difficult for the students but pretty much everyone got the grades they had been predicted.

Another young Pakistani woman who took her A-levels in 2007 recalls than that apparently the Economics paper got leaked. The results were definitely peculiar. Despite an A in her AS level, i.e. the first part of her A-level, she could only manage a B overall. Her friends suffered similar fates. One friend of hers who had scored in the 98th percentile in his AS level incredibly got an overall B after the second paper. It was fairly obvious that the second paper was marked incredibly strictly and perhaps penalties were applied.

While this years students may bemoan having to retake their O-Level exams, surely the prospect is not as bad as getting an undeservedly low grade that stays on your record forever?

It is unclear where the leak took place. The British Council website says “CIE’s investigation into the matter is ongoing, but at this stage they can confirm that the situation was not initiated in Pakistan and that the British Council Pakistan was not party to this compromise in any way.” I’m not sure where else in the world students take Pakistan Studies O-levels, but it’s undoubtedly a peculiar situation.

One of the reasons for choosing the CIE Board exams is their comparatively unblemished reputation. The fact that they are prepared to take extreme action in the face of irregularities is good because it means grades are trustworthy and therefore have more value in the eyes of international universities.

I can understand why the 10th graders are so upset. If you ever took Cambridge Board Exams, you’ll remember how O-levels are the worst exams of the lot. They are more stressful than A-levels because of the sheer number of subjects involved. You have nine, twelve or maybe even more wildly disparate subjects to study for; with an average of two papers per subject, exam season seems never-ending. Getting over and done with your O1 papers i.e. Urdu, Islamiyat and Pakistan Studies in 10th grade is a boon.

Having jettisoned Islamiyat and Pakistan Studies from their conscious, the prospect of retakes is undoubtedly horrific for the 10th Graders. Those who cannot take the exam in ten days have the option of re-taking in November instead but that has its own issues. They will have to take time out from studying for their main O-levels to revise Pakistan Studies and Islamiyat once again. A gap of six months will mean an awful lot more revision will be required in order to be ready for the re-take.
It is a far from ideal situation.

However, if you are one of the victims of those few cheats, if you face having to retake those four papers try to look on the positive side. You’ve revised the course not that long ago. However tough it may be to hit your books again remember everyone is in the same boat. Retakes may be tough but it’s better than getting a downgraded result because of cheating by other people.