The Okra Test Kitchen, a gorgeous new cafe/deli new  recently opened next door to its parent Okra. Okra, arguably the best restaurant in Karachi, is an institution. It’s been a firm favourite of foodies in Karachi for the last twenty years, resolutely sticking to its tiny premises in Zamzama, serving up delicious, simply prepared Mediterranean-style fare. From heavenly bread to the respect with which they treat their superlative ingredients, Okra is a true foodies restaurant.

The Okra Test Kitchen, the new offshoot, is a concept cafe where food prep literally happens around the patrons. The entire cafe is basically a kitchen with four tables (YEP its even tinier than Okra itself). As you walk in, there’s the pastry station and further in there’s a counter displaying a range of baked goodies, behind which a chef works preparing various savoury and sweet items. Test Kitchen serves up a range of light dishes from noon onwards but is also a place to pick up freshly baked bread, croissants, scones and other goodies. From being completely unable to buy good fresh bread or croissants in Karachi just a year ago, we now have two excellent options – Okra Test Kitchen and Marcels.

We tried the scones, the croissants and the portugese custard tarts on one take-out mission and they are all delicious. We spoke to Mariam, a recent psychology graduate from the US now applying to culinary school, who looks after the front of house for Okra Test Kitchen.

“Our bakers are the Okra bakers and the recipes have been developed and tested in house. We import strong 00 flour which you need for many of these breads and only use imported butter. I’ve worked in the Okra kitchen for two summers while doing in my degree and I have experience making many of these items including the mini quiches and croissants. In fact I helped develop the recipe for the Portugese Custard tarts.”

While the bakery and deli items are most welcome, Okra Test Kitchen is more than just a deli or bakery – it’s a very unusual dining experience.

“I’ve not been to such an open plan restaurant where the guests get to interact with the people making the food. The chefs are encouraged to talk with patrons whereas usually the chefs are behind doors or walls. It’s an interesting experience for both the chefs and the diners, particularly those who are passionate about food,” says Mariam.

The Okra Test Kitchen is small but cosy

It’s certainly a novel experience being able to see food prep happening so close by but it is not in any way intrusive or distracting – except when the  coffee machine fires up as the noise can momentarily interrupt your conversations. Most of what you actually see is the finishing touches – a steak being seared, pastry being glazed, garnishes added. The raw food prep is done earlier or hidden away. The dining experience at Okra Test Kitchen feels very inclusive and relaxed – and the food is just as delicious as you’d expect from Okra.

The menu is an ecclectic mix of light dishes based around the idea of sandwiches and tartines – pairing some delicious, simply prepared ingredients with excellent bread. For example sliced avocados on chewy sour dough bread topped with fried eggs or sliced merguez sausages with Labneh on a crunch baguette. Croissants, sourdough bread, ciabatta and baguettes are used in happy harmony with ingredients such goat’s cheese, meatballs, steak, Camembert, sauteed kale and Iranian cottage cheese.

The seared Iranian cottage cheese with pickled chilli is a must-have, as is the shaved beef in a mini baguette. Friends on the next table adored the seared salmon and sambuca on corn bread while the merguez sausages are another must. In fact everything we tried was fresh and tasty, with interesting combinations of flavours.

Desserts can be chosen from the baked goods being made around you. We tried a strawberry danish pastry, fresh from the oven and the Portugese custard tart. Crisp, delicate and oh-so-yummy, both were scrumptious. 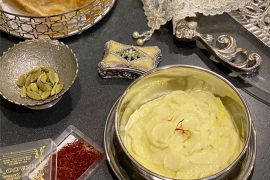 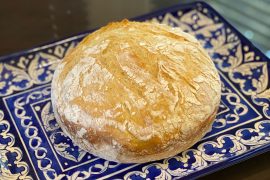 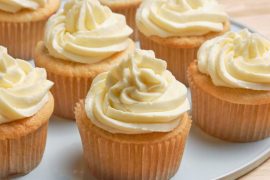