After the excellent reviews proceeding the Lahore chapter of the theatre adaption of “Dracula” we were anxiously awaiting the performance in Karachi. The play “Dracula” by Happy Owl Productions is a theatrical adaption of Bram Stoker’s classic vampire novel, Dracula, a tale of love, loss and redemption. The play starts with the Princess of Transylvania getting news that her beloved Count Vlad has been killed at war with the Ottomans. Upon hearing this distressing news, the princess slits her wrists and dies. When Vlad returns he is enraged and vows to reunite with his lost love, Mina. Mina resides in London with her betrothed Harker Van Helsing. As the destinies of Dracula, Van Helsing and Mina become intertwined, they begin a treacherous journey that can only end in spectacular violence. A love story starring a handsome vampire? Sounds perfect!

The role of Dracula/Count Vlad was played by handsome heart-throb Daniyal Ayat. Alongside winning the heart of Mina, Dracula also won the heart of the entire crowd with his smoldering looks, sultry demeanor and lithe movement. Mina was played by the gorgeous Jahan-Ara Chugtai, who looked absolutely stunning through out the play due to her exquisite ensembles. Although the casting was done very well and all the characters seemed to look the part, there was room for more chemistry. The play was conducted such that the characters donned British accents to suit the script and context of the play. Through the inconsistencies in some of the actors’ accents, it was evident that this was an amateur performance.  What stood out for me amidst the play was the typical representation of a quintessential gay “fashion designer”, I believe the intention of the directors was to add comic relief, but in the midst of such a dramatic plot, the inclusion of James the designer just seemed like a forced effort. The lead actress Mina also struggled to show the depth and range of emotion, which was starkly evident during her soliloquy.  Yet, it is notable that Shah Fahad  playing Harker and Hassan Raza playing creature gave A list performances, truly raising the standard of Pakistani theatre.

The play Dracula featured live music and singing. There were several members of the cast that sang live and play showcased two singers as well for the ballroom scenes. Although I wouldn’t say that the live singing was suited to all the characters, Risham Fiaz Bhutta’s performance definitely stole the show as her booming and electrifying voice sent chills down the audience’s spines. The play also features seductive dances, which we choreographed excellently, bearing in mind all the theatrics, but at some points the coordination amongst the crew was off.

The stand out factor about the play was the magnanimous set and the elaborate costumes. In terms of aesthetics and presentation this play would definitely be a 10/10. From a fancy LED screen that encapsulated different rooms in Dracula’s castle, to the ornately crafted bricks on the wall, the beauty of the elaborate set itself was the backbone of the play. The sensual candle lighting and the ornately done room and tasteful furniture choices definitely contextualized the play.

Dracula – the karachi chapter was a good effort in terms of the many facets of theatre incorporated (live music, dancing). The set and the costumes were immaculate but the acting somehow fell short of my expectations from the play.  Although it was a great effort at the hands of Saihaam Gulzar Khan and Mahnoor Zaidi, I believe these budding directors have a while before they reach the stature of the theatre giants of Pakistan. 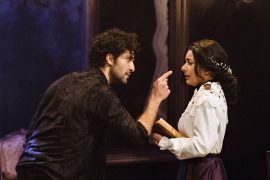 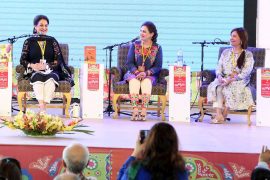 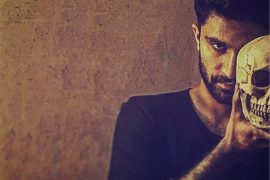