Review: Grease The Musical delivers a fun night out to Karachi

A little slice of Broadway hit Karachi this week. Nida Butt’s much-anticipated Grease opened this week to a packed theatre. With shows like Chicago and Mamma Mia under her belt, Butt has shown she can put together a great musical. Grease scores for its energy, excellent choreography and strong performances by most of the cast, particularly the incredibly talented Sanam Saeed. Her co-star Ayesha Omer will undoubtedly also pull in many fans, eager to see her perform live, but she doesn’t quite live up to the role of Sandy. Despite Omer’s patchy performance, the show is entertaining, engaging and tremendous fun.

Grease is one of the longest running musicals in Broadway history but it is the film version that most Pakistanis know and love. Fans of the movie will note plenty of changes from the film version, with several songs they may not have heard before, including Freddy My Love and Mooning. This is because Nida Butt’s show is a true stage version of Grease, which requires demanding solos from much of the cast unlike the film, which focuses primarily on Danny, Sandy and Rizzo. Thankfully, Nida’s cast is more than up to the task.

Although the cast includes several newcomers and students, they pull off a show that requires great depth of singing talent. All but two of the Pink Ladies and T-birds have big numbers to sing and they almost all do an excellent job. Most of the cast nailed the acting, the singing and the dancing but there were two standout performances. 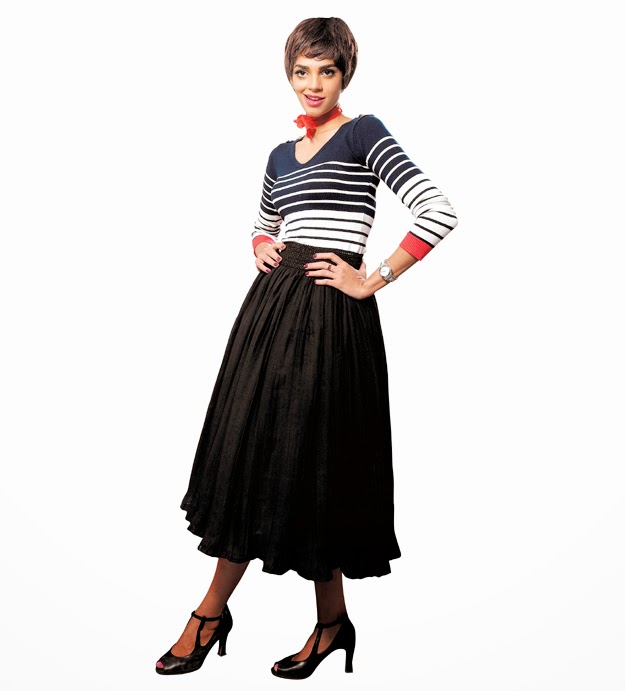 The first was from star Sanam Saeed (tweets @realsanamsaeed playing Rizzo. Saeed simply goes from strength to strength. A veteran of Nida Butt productions, Saeed has previously starred in Chicago, Mamma Mia and Carnage. Her performance as Rizzo was brilliant. From her excellent American drawl to her body language, Saeed’s performance was breathtaking. She has an enviable stage presence and with this role she once again showed her versatility as an actress. It was hard to imagine that this sassy, louche character was the girl from Zindagi Gulzar Hai.

Saeed’s poise as an actor is also worth mentioning. At one point a stray cat ambled onto the stage, much to the amusement of the audience. Without missing a beat, Saeed quipped “Marty, your cat’s wandering around again. Be a doll and shoo her off!” Marty gamely played along and shooed the cat, which beat a hasty retreat off stage. It was a spontaneous moment that the audience loved.

One of the pleasures of Butt’s productions is the live singing. As expected after Mamma Mia and Chicago, Saeed’s vocals were more than up to the challenge of the role. She did a fantastic job with the popular “My name is Sandra Dee” number but her emotional rendition of Rizzo’s other big number “There are worse things I could do” was one of the best performances of the night.

The other exceptional performance was by newbie Sara Haider (tweets @sarhaider) . Playing Marty, Sara stood out from the first scene both for her looks and her performance. However, she really came into her own with her big number “Freddy, my love”. The song is challenging and Sara’s rendition was fabulous. Her voice has great depth and range and you couldn’t help wondering if Sara would have made a better job of Sandy than Ayesha Omer.

Ayesha Omer, overall, was a bit of a disappointment. She has a sweet voice but doesn’t quite have the range for solos like “Devoted to You”. She looks the part and makes a sweet, attractive Sandy but her performance left a lot to be desired. Sandy is an incredibly difficult character to play without her coming across as sanctimonious and irritating. Sandy should have spunk whereas Ayesha Omer’s Sandy merely seemed whiny and clingy. She only appeared to have two expressions, ‘shocked’ and ‘peevish’ and her two-dimensional performance sapped some of the energy of the show. As an actress who is used to film, Ayesha seems to have found it hard to adapt to the stage and deliver the sort of nuanced performance that the best stage performers can give.

At the heart of Grease is a rather sweet love story about two seemingly different people making major changes for each other. Despite surface differences, Sandy and Danny are made for each other. Ahmed Ali has just the right combination of swagger and vulnerability as Danny. Unfortunately there is no chemistry between him and Ayesha and it’s hard for the audience to root for them to be together. This robs the production of some of its soul.

Luckily the stage version of Grease focuses less on Sandy than the film. With the remaining cast being so strong, the production has an infectious energy. The choreography by Abdul Ghani is fantastic and big numbers like Grease Lightning and the school dance Hand Jive are brilliant. The sets are good though not great. The guys look by Mariam Azmi is excellent and the girls costumes by Huma and Amir Adnan are fun. The production quality has a less amateur feel than most Pakistani shows although there is still plenty of room for improvement. Nit-picking aside, the show is a rocking, foot-tapping entertainer.

A word of caution though for parents who like to bring their children to shows. This production is PG13 for a reason. There is a lot of smoking, some drinking, talk about teenage pregnancy and sex. It is not at all appropriate for younger children.

For the rest, Grease is a fun night out even though the morals may not appeal to many Pakistani sensibilities. The show generally gives the impression that anyone who doesn’t smoke, drink and date is old-fashioned. That said, if we can watch Game of Thrones and Hannibal, Grease seems quaint and staid in comparison. Mind you, it’s odd to see smoking glorified when we’ve become used to on-screen health warnings any time an actor lights up.

Grease is what it is – an entertaining period piece with a great soundtrack – but it’s a shame that there is no serious exploration of peer pressure. In a world with snapchat, cyber bullying and sexting, it’s odd to think that Grease may still have some relevance. The utter necessity of appearing cool and popular is something all teens will recognize. Most of us grow out of it but teen peer pressure is a powerful thing. An updated version of the story would have been gripping but it wouldn’t have been Grease.

So do go watch Grease. Go for the songs, the choreography, the acting and the entertainment. Sing along to Grease Lighting and Hopelessly Devoted to You. Revel in memories of John Travolta and Olivia Newton John. Enjoy the energy and the experience of live theatre – something that is still unfortunately a rare experience in Karachi. Thumbs up to Nida Butt for another enjoyable show.