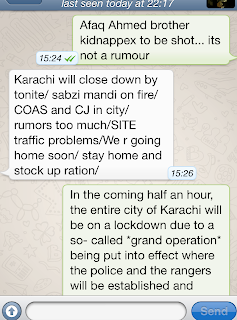 Have you heard? There’s a rumour epidemic in town. Yesterday, when random firing broke out all over the city the rumour mill went into overdrive. As the afternoon progressed we saw petrol pumps and shops closing, firing around the city and tales of an indefinite strike. There were traffic jams as people rushed to get home and grocery stores were packed due to panic buying. This was all fact. What caused it all was something of a mystery. SMS, phone lines, whatsapp, twitter and facebook were abuzz . Sure people wanted to make sure loved ones were safe and warn friends to stay safe but suddenly all sorts of stories floating were floating around – most of which were pure nonsense.

For example, at various times yesterday I heard:-

– Farroq Sattar shot
– No, wait thats Farooq Sattar attacked, not sure of injuries
– Afaq Ahmed’s brother kidnapped to be shot
– Grand Operation against terrorists started
– actual target of operation MQM which is why MQM closing everything down
– Sabzi Mandi on fire
– Dawn News repeatedly transmitting that 50 children have been kidnapped in the last week from posh schools in Clifton and Defence
– A black SUV is roaming Clifton and Defence since the last few weeks and kidnapping and raping women while filming the whole process for blackmail purposes
– 2 girls kidnapped in plain view outside cafe on Zamzama

Of all of those, only the Sabzi Mandi fire story checked out and even that seems to have had no sinister cause – apparently it was caused by a short circuit.

The last three stories were particularly pernicious because they’ve been doing the rounds for a few days. The head of Dawn TV laughed at the suggestion they’d transmit such nonsense. Most people passed on the message without checking with Dawn. Also, think about it – if 50, that’s right FIFTY, kids had been kidnapped in a week in Clifton and Defence wouldn’t ONE have made into all the newspapers?

The black SUV story has been terrifying women drivers for the last week. Everyone knows a friend of a friend who’s been followed. Its with the cafe story however that the “friend of a friend” really starts causing trouble.

So we hear yesterday that two girls have been kidnapped outside a popular Zamzama cafe. Some disbelief exists so we phone the cafe. All they will confirm is that the cafe is closed and that’s all they know. They refuse to comment on reports of firing on Zamzama. We decide this sounds very dodgy. Meanwhile a friend says that her friend’s student’s mum was in the cafe at the time and heard shots and that the guard had said that two girls were kidnapped in front of witnesses who were powerless to help. We decide that the cafe was being cagey because the kidnapping was fact. The story is passed on to friends and relatives. Then someone says that the CPLC and police have had no reports of a kidnapping. This is confirmed high up in the CPLC (Citizens Police Liason Committee – who do AMAZING work helping recover kidnap victims). So it was a hoax. Turns out another friend heard a variation of the story two days earlier – same cafe. This time the “friend of a friend” was in the cafe when armed gunmen came in looking for girls and dragged two out in front of shocked witnesses. All the elements of the kidnapping were different except the name of the cafe and the number of girls picked up. Another hoax.

By this time however, we are thinking “there’s no smoke without fire”. Those who can afford it have hired personal guards and it looks like many more women and children will be going around with personal guards than before. The rumour mongers succeed.

Yes, we live in uncertain times. Way too often the unbelievable rumours we hear turn out to be true, but seriously yesterday was ludicrous, scary, maddening and saddening.We must all refrain from passing on stories unless we’ve checked the source. Our sanity is at stake.