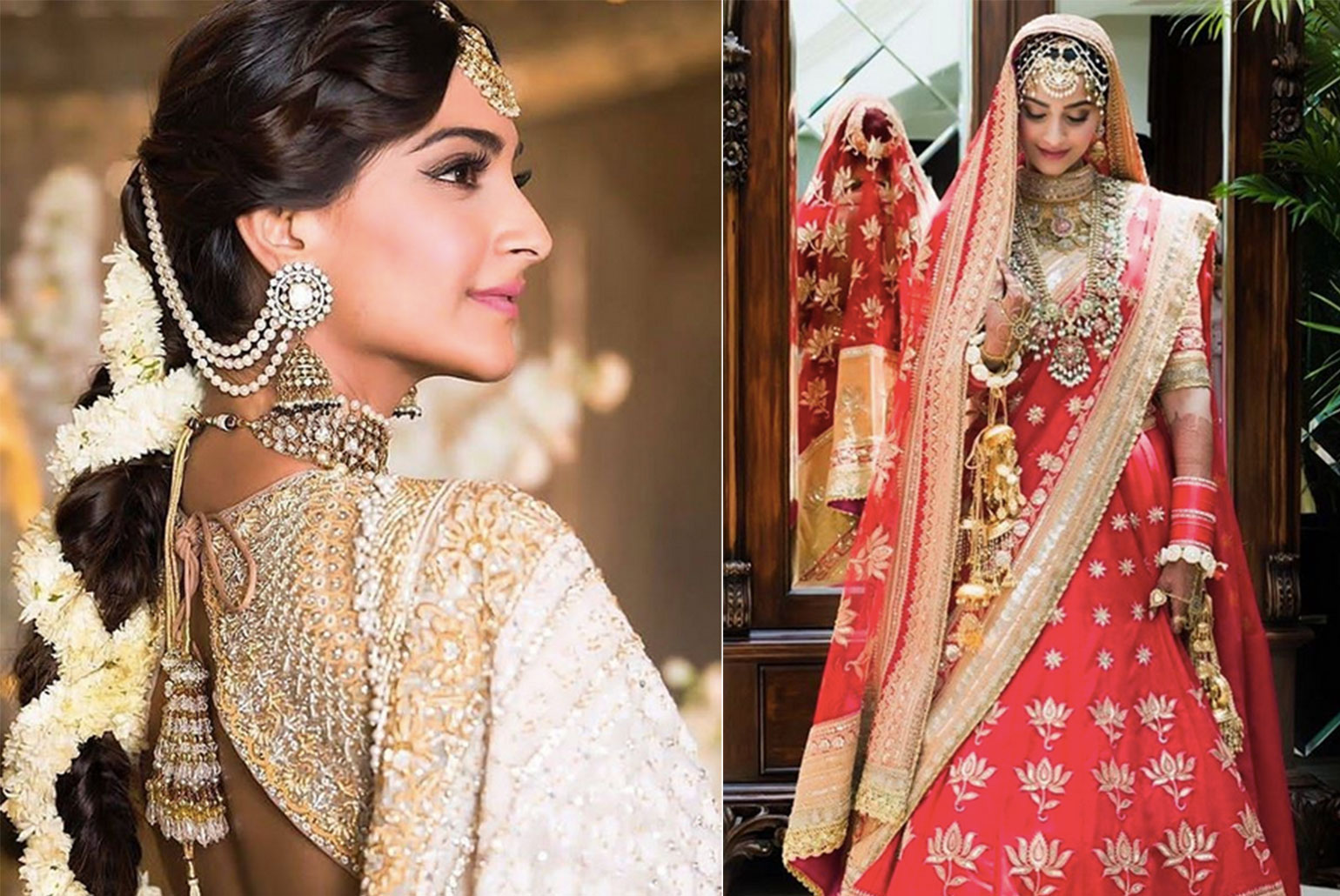 Sonam Kapoor married Anand Ahuja this week and her wedding style was not exactly what we expected! We’re big fans of how Sonam carries fashion in general and with ace stylist Rhea Kapoor for a sister, she’s generally one of our style crushes so we couldn’t wait to see her wedding looks.

Sonam Kapoor revealed that she’d be wearing  3 As for her wedding functions: Anuradha Vakil , Abu Jani-Sandeep Khosla  and Anamika Khanna. Now Anuradha Vakil is not a name that we’re as familiar with as the others but Sonam chose her not for one but two events! Way back in 2014, while talking about Rani Mukerji’s look in ‘Saawariya’,  Sonam Kapoor had said that she loved the look designed by Anuradha Vakil, and that she plans to wear an outfit by the designer at one of her wedding functions. So this was a decision that was planned a looong time ago!

Festivities kicked off with a low-key traditional mendhi-lagaani ceremony for which Sonam chose a soft coral and light gold  Anuradha Vakil with a striking pale purple underskirt for her gold net lengha.

It was a delicate, properly understated mendhi look – paired would you believe it with Nike sliders!

Later that evening, an even cooler pic emerged of Sonam in her PJs with mendhi up to her elbows – super cute!

Next up was the Sangeet and it was one of our favourite bridal looks from Sonam Kapoor’s wedding. The night had a classy all-white theme and the bride and groom chose Abu Jani-Sandeep Khosla – who’s also styled Sonam in her upcoming film Veere Di Wedding. This look was drop dead gorgeous – an elegant, timeless take on wedding style. The chikankari lengha choli took multiple teams of artisans eighteen months to complete!

We loved the classic details – the phool in her hair, the jewellery and that combination of gold and white on white. The ultra short choli is sexy but with a demure neckline that’s super classy and beautifully traditional lengha ticks all the boxes.

For her shaadi, Sonam chose a rich traditional red and went back to Anuradha Vikal for the outfit. To be honest we were a little disappointed with the look. We’re all for traditional looks for your wedding day but there was just too much going on – the three or four sets of jewellery, that massive matha-patti by Amrapali jewels which was all wrong with a dupatta that already had a heavy border and the unflattering draping.

Sonam Kapoor in Anuradha Vikal
There were some lovely traditional touches but they were overwhelmed by everything else that was going on. Those gold ornaments hanging from her wrists are kaliras which are worn with traditional red and white Chooda by Punjabi brides – Sonam’s Peacock Kaliras were custom made by Mrinalini Chandra. All in all, not as stellar as we expected from Sonam – we’d think the groom’s fam chose it if we didn’t know she loved this designer for years. In any case she was a very happy bride and that’s what matters. Sonam was back to her A-game for the reception though with a stunning, minimalist lengha choli from Anamika Khanna that was all about the fabric. An unusual combo of silver and soft charcoal, Sonam’s reception look showed that a bridal look doesn’t have to be covered in kaam or embroidery. We love how the contemporary minimalism of her outfit lets those ommphy traditional jewels shine and how she’s done for a simple straight blowdry and teeny earrings to let the neck pieces do the talking. From that chevron stripe to the cape style of the dupatta this is masterful designing from Anamika Khanna – we can’t get enough of this deceptively simple outfit. And how lovely to slip into something lighter and more fun for a relaxed reception after a very formal wedding.