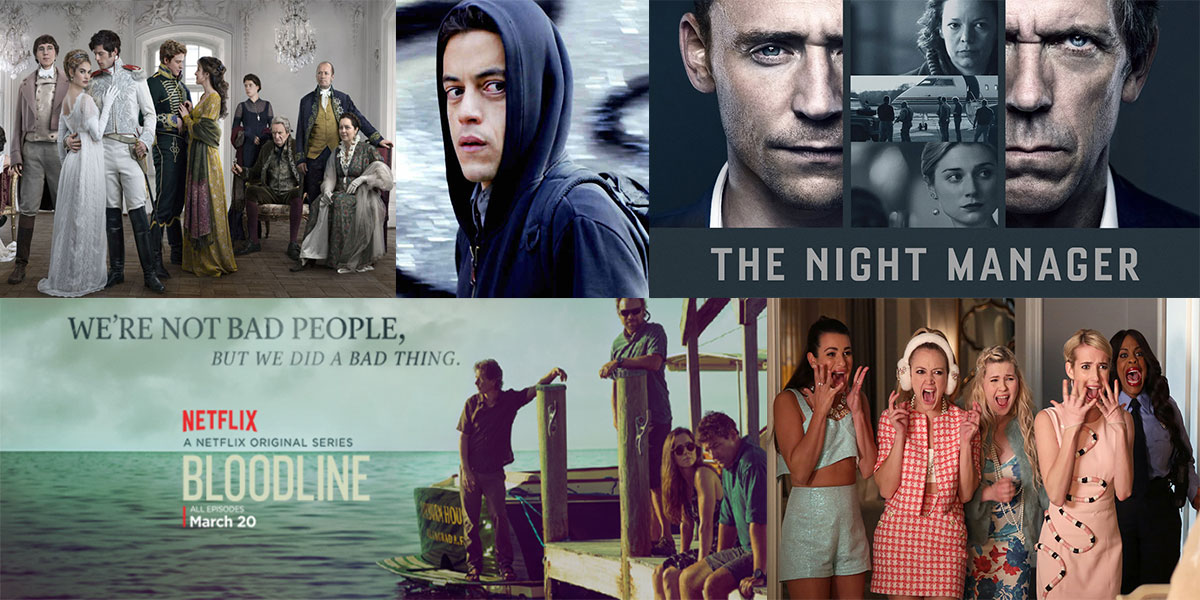 Summer is over and while most of our fave shows are back with new seasons, it’s always nice to discover something new. If you’re wondering what to watch next, there are plenty of great options.

With 12 Emmy wins, the Night Manager has taken the world my storm. The Night Manager is based on the book by John le Carré, which is a riveting tale of an ex-British soldier who infiltrates a large crime ring. The wonderful thing about the Night Manager, aside from Tom Hiddleston’s and Hugh Laurie’s brilliant acting, is the gripping story. This isn’t a series with an aimless plot and you’ll be hooked on every episode, watching intently the game of cat and mouse. The Night Manager is a show to be reckoned with.

For those of you who adore gore, lore and horror, and can’t wait for new horror films on the big screen, American Horror Story is the series for you. AHS has seasons which are set in different places with different casts but this year American Horror Story: Roanoke has been highly anticipated. It is a turn away from the usual format of the show and the plot has a more scary and slow burn for watchers. The show itself is a terrifying horror story about a school for witches in New Orleans. Personally, I’m pretty happy with my Hermione Granger but for those of you who crave a little more, I suggest watching this.

Horror seems to be very in right now because Scream Queen’s resembles AHS. However, it is quite PG in comparison and the humour is more slapstick. Its cast contains celebrities like John Stamos and Lea Michele, which brings an interesting dynamic to the show. Denise Hemphill, portrayed by Niecy Nash, is one of my favourites and those of you who have seen season one will remember, “Chantal, you have a knife in your face!” (and yes I know you read that in her voice). Scream Queen’s new season is coming out this week and I would highly recommend binging on the season before. But even if you don’t, you can start with season two as it has moved from a sorority house in season one to a hospital.

The UK drama that seems to have taken over the world! We follow Elliot Alderson, a young computer hacker who is recruited by an anarchist team of hackers called the ‘fscociety’ headed by Mr. Robot. Elliot suffers from an anxiety disorder and is considered an outcast. Mr. Robot is the perfect psychological thriller which plays with your mind and always has you thinking; the witty responses and Elliot’s tormented anxiety-filled mind are honestly some of the most interesting parts of the show. This show will definitely have you obsessively starting the next episode until you realize you’re done with the whole season.

Now, the Crown hasn’t officially come out yet but there has been a certain buzz around it. It’s not only the most-talked-about new Netflix series but it is also the series that has the highest amount of money spent on it. IMDB has estimated it to be around $156, 000, 000. The Crown is based on newly-wed Queen Elizabeth II who is faced with the daunting prospect of leading the famous monarchy and forming a relationship with the Prime Minister, Winston Churchill. I feel this series will be binge-worthy because of its historical background, something I find to be captivating. It will allow us to see into the British Empire’s decline and the more interesting aspects of the Royal Family – and if the story is terrible we can still drool over the costumes and interiors.

A BBC show, War and Peace is a series based on the famous book by Leo Tolstoy. Now, I’ve read War and Peace so I went in with trepidation because series that capture the essence of a book are very rare. However, this series wasn’t half bad – it was actually quite good. The production for War and Peace is lavish and truly captivating, which can help to distract from the minor flaws in the series and that’s the most we can ask for. Overall, if you’ve read the book or want to watch a series filed with head spinning and complicated romance War and Peace is the perfect option.

Attorney Chuck Rhodes is in a battle, predator vs prey, with hedge fund King Bobby Axelrod. Rhodes has never lost a case and uses new evidence and his wife who works for Axelrod to build a case against him. Billions is the show that has you on the edge of your seats, the thrilling new ways that these Alpha males use to avoid each other’s attacks will leave you speechless. I can bet that you will be done with the season within one weekend and won’t even realize it.

This is a based on a true American crime story that was highly documented during it’s time: the murder Nicole Brown Simpson and the trial of the ‘alleged’ murderer OJ Simpson. I watched this series and I can’t stress enough how good it is. From the Dream Team to the LAPD’s Defence you are always present in this show. Even though you probably know the outcome you’re still left in shock as if you have literally witnessed it for the first time. You will probably also search up the real court videos and spend hours reading different opinions but it is so worth it.

A quintessential prodigal son story. The return of eldest son Danny Rayburn causes tensions to rise between his siblings, John, Kevin and Meg. Secrets are spilled and shocking confrontations occur in the Rayburn family. This show delivers on every magnificent cliff hanger and at the heart it has a brilliant plot. The slow burn of the story allows you to really get to know the characters which just makes the twists and turns even more exciting. Another plus note is that the acting is especially good.

I probably don’t have to review this one but, for those of you living under a rock, Stranger Things is the widely popular new show. It is set in 1983, Indiana and it is based on the vanishing of a little boy. As friends, family and the local police search for answers they are faced with the supernatural and a strange little girl. The 80’s format of the show brings a new element to the series that is different to the others. It is scary and funny and thrilling all at the same time – which is why it appeals to so many people. You can binge this with any one of your friends because of its dark yet hopeful storyline.