Since Sonam’s outfits were well publicized through out the wedding, we were wondering what all the other stars were wearing at the festive #SonamKiShaadi. Here’s a catalogue of the outfits that the celebrities donned for the many events. The gorgeous lehnga choli’s and saari’s are definitely giving us major inspo for the next shaadi season!

Kareena Kapoor stunned at Sonam ki Shaadi. For the morning reception she wore a powder pink peshwaas embellished with silver. She accessorized this ensemble with traditional jewelry paired with a traditional hairdo (sleek bun adorned with flowers) and a heavy application of kajal. Kareena’s night look was sensational. Looking like a goddess in her gold saari and sultry make-up, Kareena stunned at #sonamkishaadi. 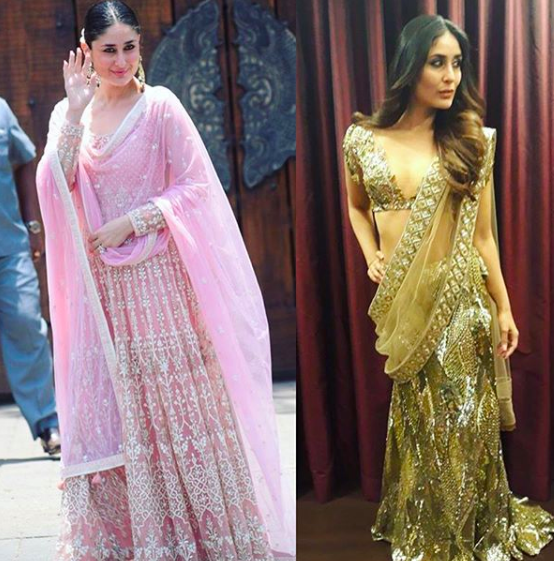 Janhvi and Khushi looked resplendent in embellished pink and yellow lehengas by their favourite designer Manish Malhotra. Giving them suave company was daddy Boney Kapoor dressed in a pink and white pyjama-kurta. For the night, Jhanvi and khushi wore bedazzled ensembles in candy pink and icy blue.

Rani Mukerji wore an all-white look for the mehendi ceremony. She wore textured pants with a white lace top. She completed the look with a white handbag and silver-toned pointed stilettos. In her second look Rani Mukherjee donned a gold Sabyasachi Lehenga Choli with maroon accents, this was perfectly complimented by her maroon lipstick. Lastly, Rani Mukherjee wore another Sabyasachi number, with a purple lehnga set with a light green dupatta. To complete the traditional look, she opted to accessorize with traditional jewelry pieces, namely: a maang tika, earrings, a necklace and bangles.

Rani Mukherjee’s look for the Sangeet

In a purple Sabyasachi Lehnga

With his iconic style, sonam’s cousin Ranveer Singh donned a crisp white churidaar and kurta by Rohit Bal. He completed the look with a light floral half-sleeved badhgala jacket and white shoes with a floral pattern. 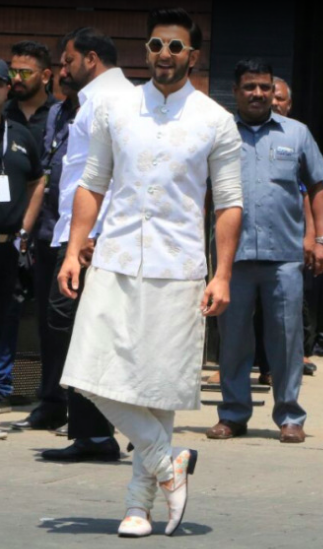 Anil Kapoor opted for a white kurta-pyjama set, embellished with silver patterns, for the Sangeet ceremony. The bride’s father, Anil Kapoor went for a long Raghavendra Rathore ivory kurta worn over white tapered pants. He accessorised the look with a layered green necklace.

Showcasing a burst of colours, Karisma Kapoor went for a green coloured choli and a floral print lehenga from Sabyasachi. She accentuated the look with a maang tikka and a choker. In her second look, Karishama chose a demire white sari with silver embellishments on the borders, paired with a heavily embellished blouse.

Karishma Kapoor in a Sabyasachi Lehnga

Karishma is a white demure saari 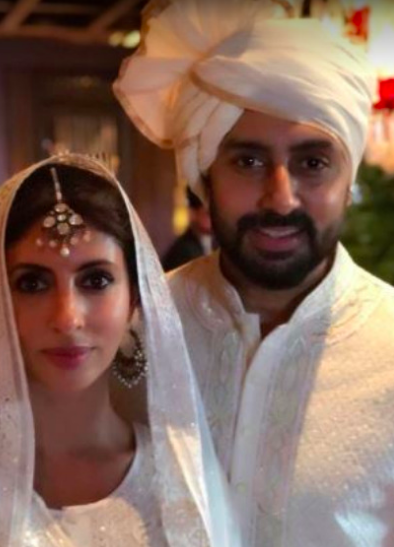 Bollywood’s favourite director, Karan Johar stepped out in a pastel pink coloured bandhgala for the morning wedding. He wore the long jacket with a white kurta-pyjama set.  He went for an indo-western look with a draped white kurta designed by Shantanu & Nikhil. He completed the look with a pair of black loafers. 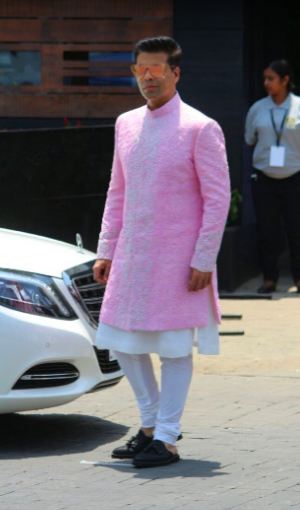 Bride’s best friend Jacqueline was seen wearing a bright pink lehenga by Anita Dongre. She completed the look with ethnic jhumkas and sported a side braided ponytail. On another occasion Jacqueline Fernandez stepped out in a printed white lehenga set. Keeping her look traditional, she completed the look with a bindi and a gajra-adorned bun. Jacqueline’s third look was an ethereal white beaded saari with a bandeau top with full and wavy hair, accentuated by statement earrings.

Jacqueline Fernandez in a pink number

When it came to Swara Bhaskar, she stepped out in a bright blue lehenga set. For this look, she sported a tight bun and accessorised the look with a maang tikka and big earrings. For another event, Sonam’s ‘Veere Di Wedding’ co-star Swara Bhaskar donned a classic chikankari lehenga in golden and white by none other than Manish Malhotra. She completed her look with heavy jhumkas from Amrapali jewels and a beautiful maangtika by Mahesh Notandass Fine Jewellery.

For the morning wedding, Anshula Kapoor chose a white and pink lehenga set. She accessorised the look with a layered green necklace and a potli bag. 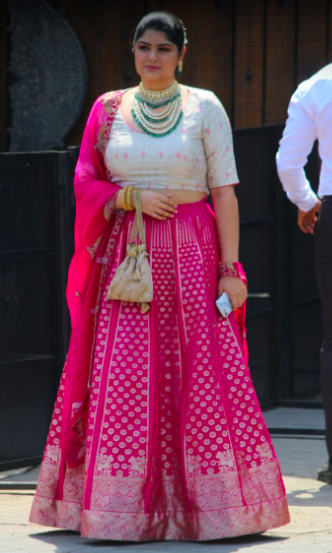 Sonam Kapoor’s best friend Perna Qureshi was also present for all the celebrations. She sizzled in a sheer sari with silver embellishments. 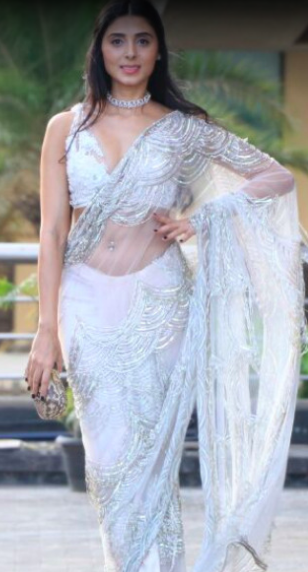 The mother-daughter duo Maheep and Shanaya Kapoor sizzled in pastel tone traditional attires. Shanaya wore a halter top with a lehenga, while her mother sizzled in a shimmery sharara set. On another occasion, Shanaya looked like a princess with her off-shoulder blouse paired with a muted pastel pink lehnga and flower adorned hair.

Shanaya and Mahdeep Kapoor at the Wedding Reception

Shilpa Shetty  looked radiant in her transitional ensemble, her outfit seems to be a hybrid of a saari and a dress. Looking modern and sleek at the Night reception, Shetty accessorizes her outfit with a bejeweled necklace and earrings, and of course her radiant smile. For her second look, Shilpa Shetty chose an outfit by Sukriti Aakriti. this bohemian ensemble is paired with a bright orange bag and huge traditional statement earrings.

For the reception, Kangna Ranaut wore a Gaurang Shah sari, gifted to her by her sister. The organza saari was a combination of dusty pink, hot pink and a rich coppery gold. She styled her ensemble with a choker necklace, small earrings and poker straight her. Kangna Ranaut’s understated but sophisticated look was a definite winner at #sonamkishaadi 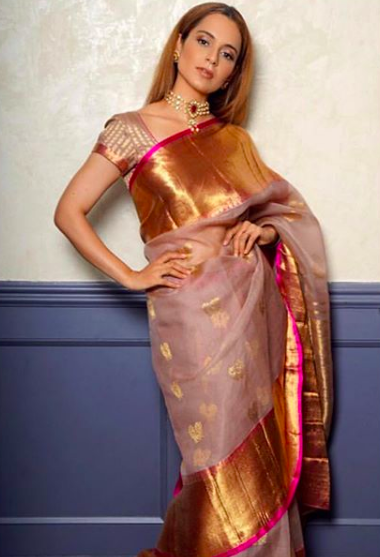 Kajol donned a silver saari heavily embellished saari for the night reception, she paired this saari with small jhumkas and smokey eyes. 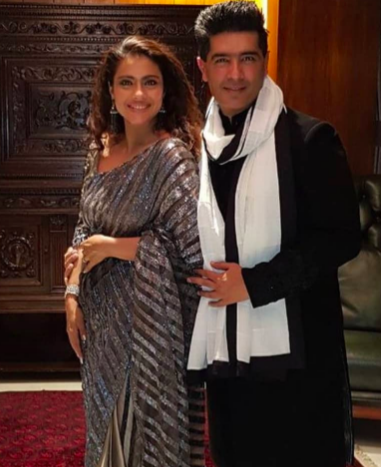 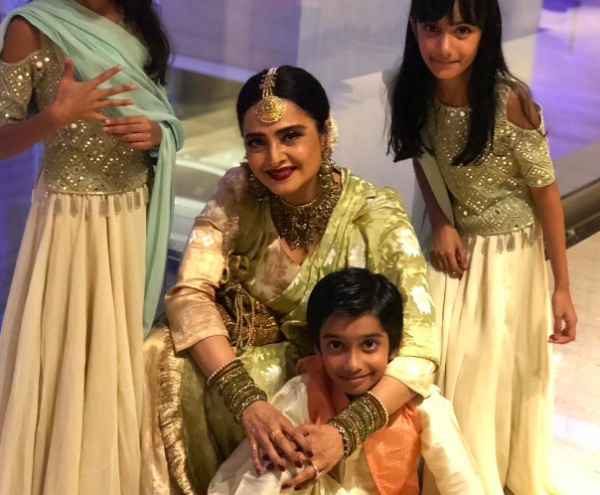 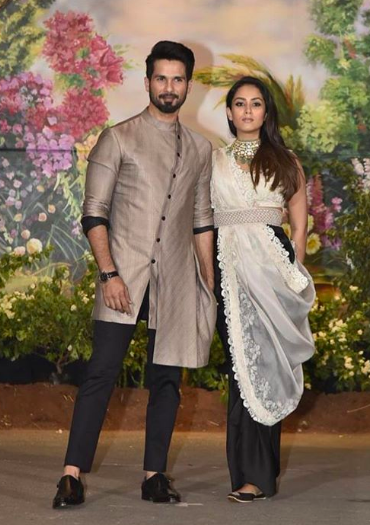 Mahduri Dixit looked as graceful as ever in her paster pink gown, adorned by silver embellishments. 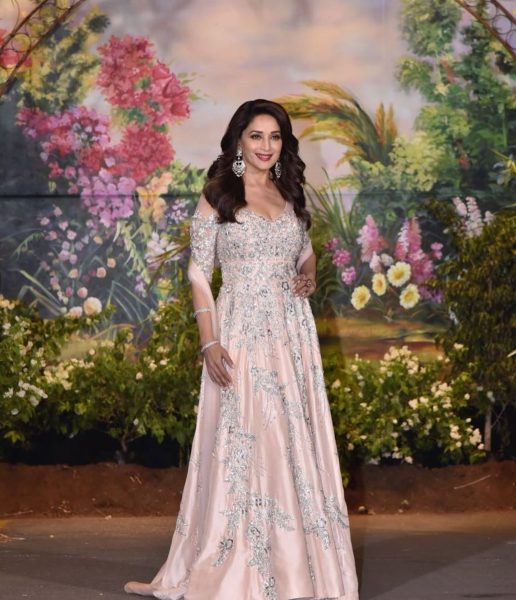 Alia Bhatt wore a lime green Sabyasachi Lehnga Choli for the night reception. She paired this outfit with a mang tikka and an elaborate choker necklace. We definitely love the bold choice of colour, making Alia Bhatt stand out as one of bollywood’s top fashionistas. 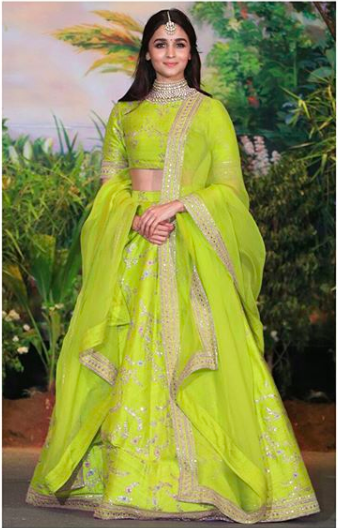 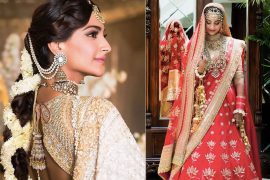 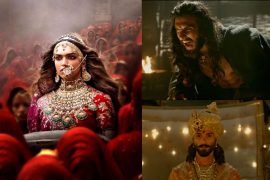 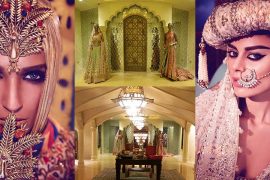